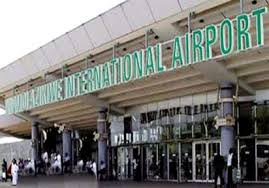 Tension is mounting as passengers were left stranded following a strike by aviation handling staff at the Murtala Muhammed International Airport on Monday.

At the Nnamdi Azikiwe International Airport in Abuja, it was no different as sources said many other airports were being drawn into the strike circle.

Airlines dropped off passengers, who appeared confused as they could not pick their luggage. Other airlines were said to have returned to airports of take-off.

In Abuja, SAHCOL and Pathfinder companies were said to have been drafted in to help

Efforts are said to be on to resolve the disagreement before the strike spreads all over the country and creates an unmanageable gridlock.

Nigeria in top 10 of countries where it’s most dangerous to be a Muslim, or a Christian in 2023