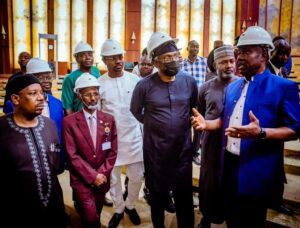 The Speaker of the House of Representatives, Rep. Femi Gbajabiamila, on Wednesday called for the speedy completion of the ongoing renovation of the National Assembly complex ahead of the delivery deadline of August 2023.

Gbajabiamila made the call in Abuja as he toured and inspected key aspects of the work, particularly the House of Representatives Chamber, the dome and foyer of the complex.

However, he warned that this must not compromise the quality of the work to be delivered.

The Speaker said that though the renovation, which began last month, had progressed well, he would still ask the project managers to speed up the pace and beat the deadline.

At the chamber, Gbajabiamila was briefed on the details of the upgrade and the adjustments to be made to the sitting areas of lawmakers, the chamber staff, the presiding officers, the press gallery, the roof and the adjoining rooms to the chamber.

Speaking with House of Representatives correspondents after the inspection, Gbajabiamila said the changes introduced were “impressive” and would greatly assist the lawmakers in their legislative duties in line with global standards.

Gbajabiamila stated, “This work started in August, a few weeks behind schedule, but for a good reason. So far between August and now, giant strides have been made; you can see the whole chamber has been ripped apart, and the innovations are going to be state-of-the-art.

“We will be proud to have a chamber that matches the best standard all over the world; so I am quite impressed with the work so far.

However, the Speaker insisted that speeding up the pace of completion must not compromise the quality of the work.

While the renovation, which is being carried out by Visible Construction Limited, is ongoing, members will reconvene from their annual break next week to hold plenary sittings in a temporary chamber already prepared at Hearing Room 028.

Giving his impression of the temporary chamber, Gbajabiamila said, “So far so good, we are happy and this temporary site where we will be sitting for the next 9-10 months, is obviously a far cry from where we used to be…

“This used to be a hearing room to a legislative chamber, a lot of adaptations and a lot of innovations have been made and we are quite pleased with the work so far; so we are ready to go.”

The Speaker said the 10th Assembly would most likely be inaugurated in the temporary chamber, except the project managers would be able to complete the renovation of the main chamber months before the scheduled deadline.

“The 10th Assembly more than likely will kick off from here unless work can be accelerated, but you don’t want to accelerate work and compromise the quality of the work, so it’s better late but done well. Anything worth doing is worth doing well”, he added.

Asked if the temporary chamber would accommodate all 360 lawmakers, Gbajabiamila replied, “The configuration is not just this place but upstairs. So, I think there are about a 100 and something seats in terms of accommodation on this level and about 200 and something upstairs.

Gbajabiamila gave hints that the 2023 budget presentation would likely be done in the first week of October.

He said he was satisfied that the project was being executed according to plans.

▪︎ Lanre Lasisi, Special Adviser on Media and Publicity to the Speaker, House of Representatives

Atiku replies Makinde: Ayu can be removed only after constitutional amendment