Copyright 2021 - All Right Reserved
Home Health Monkey pox: A few things you should know, especially if you reside in Nigeria
Health

Monkey pox: A few things you should know, especially if you reside in Nigeria 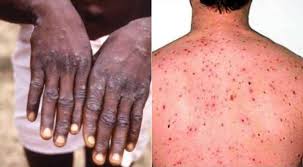 The monkey pox virus is presently in the news on account of the widely reported spread in spread in North America and Europe.

The name monkeypox was adopted follow initial discovery of the virus in two monkeys in a Danish laboratory in 1958. First human case 1970 (52 years ago) DRC. It is endemic in almost all the countries of West and Central Africa sub-region. Recent widely reported outbreaks had been of concern mainly because it occurred in non-endemic areas.  By 21st May 2022, 92 laboratories had confirmed cases, and 28 suspected cases of monkeypox reported to WHO by 12 non-endemic member States. Only recently Morocco reported a handful of cases.

It is an enveloped double‐stranded DNA virus, belonging to the poxviridae family. There are two clades (biological sub-groups with common ancestors) namely the West African clade and the Congo Basin (Central African) clade.

Presently in Nigeria, the position of the Nigerian Center for Disease Control (NCDC) is that, there is no on-going outbreak. This is essentially because monkey pox is endemic in Nigeria and no spike above usual rates have been noticed to warrant a definition of the situation as a new public health threat.

▪︎Endemic refers to the constant presence and/or usual prevalence of a disease or infectious agent in a population within a geographic area.
▪︎Epidemic refers to an increase, often sudden, in the number of cases of a disease above what is normally expected in that population in that area.
▪︎Outbreak carries the same definition of epidemic, but is often used for a more limited geographic area.
▪︎Pandemic refers to an epidemic that has spread over several countries or continents, usually affecting a large number of people.)

Since its September 2017 re-emergence in Nigeria, 558 cases with 8 deaths putting case fatality at 1.4% have been reported. Prior to then, monkeypox cases were last documented in 1978 (44 years ago).

So far about 200 confirmed or suspected cases have been reported in Europe and North-America. It is known to be less contagious compared to small pox. The Center for Disease Control and Prevention (CDC) reports that the current global spike is greatest in MSM population globally. Reassuringly, cases in the USA have been from the mild West African strains.

Transmission occurs following intimate contact, but it is not a sexually transmitted infection. It is transported across borders, borne by man or animals. Although a natural reserve is un-established, rodents are most likely to be responsible.

After an estimated incubation period of 2 – 4 weeks, initial symptoms which present are flu-like and include fever, headache, muscle-aches, chills, exhaustion and lymph nodes enlargement & sore-throat. Rashes subsequently develop on the face, hands, feet, eyes, mouth, genitals, they turn into bumps and finally blisters. Rashes may be the first presentation in some.

Diagnosis is polymerase chain reaction (PCR) based as is done with Covid-19, but done on swabs samples of vesicles. The test is expectedly expensive. Recovery is typically 2 – 4 weeks following supportive and non-specific treatment. Severe course, though uncommon, occurs disproportionately more in children.

Prevention is potentially through vaccination with small pox vaccine, which provides about 85% protection based on research models. A few concerns about side effects and non-approval for use currently confounds its utility.

Though several vaccine candidates exist, only one is approved by the FDA, USA. Should vaccination be deployed, the advisable method will be ring vaccination (only for the exposed) targeting contacts of confirmed or highly suspicious cases, as was deployed in small pox eradication.

Generally, measures like avoidance of skin-to-skin contact, face to face contact, the practice of safe sex and meticulous attention to hand hygiene using soap and water or alcohol-based hand rub, are effective.

While there is no specific treatment, maintaining a high index of suspicions, where appropriate; early detection and supportive care ensure favorable outcomes. Anybody with rash, fever, feeling ill should be screened if a history of exposure is demonstratable.

Patients with typical rashes should be isolated until the scab falls off. They would do well to also abstain from sexual contact in addition to reporting to appropriate authorities. Those who care for patients should use personal protective equipment (PPE’s) like mask; and cleaning of contaminated or exposed surfaces etc suffice.

Based on available data, as concerns the West Africa sub-region, this threat is not at the scale of Covid-19 for several reasons: Mild clade (based on analysis), endemic in West/Central Africa (natural immunity), low reproduction number (r0) compared to Covid-19, direct contact necessary for transmission vs airborne respiratory transmission and high level of public awareness about control measures strengthened by experience garnered from response to Covid-19.

▪︎ Dr. Ebuta, a Family Physician and Vice President of Medical Initiative for Africa, lives and works in Abuja.

The trial of faith, the Nigerian, the Christian

Videos showing how EFCC agents broke through Okorocha’s roof, as he prays for God’s help

At 50, CMDA Nigeria reaches out to Gosa residents of Abuja with...