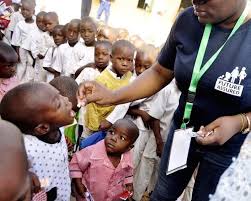 Deworming is essentially the use of medications to rid the host of worms, commonly inhabiting the intestine.

Worm infestation is one of the most common human infection, with an estimated 3.5 billion people globally believed to be affected. It has also been reported that as much as 450 million globally are ill because of this infestation. The burden is unacceptably high in low and middle income countries due to poor water, sanitation and hygiene (WASH) practices. Favorable climate for parasite maturation and propagation and weak health systems all serve to compound the situation.

Children are most affected because of higher rates of hand to mouth activity, uncontrolled fecal activity, immature immune system and on-going growth phase of development, etc.   Apart from single worm infestation, co-infection with multiple types of worms’ etc tapeworm, roundworm, pinworm, hookworm etc is common. Cases are more in rural versus urban; and enrollees of public versus private school for reasons related to poverty and ignorance.

Mostly disseminated by fecal routes, infection is commonly through consumption of contaminated food or water and also through skin penetration in the case of hook worms. Although some patients may have a low burden of infestation, yet still not a few carry millions of parasites multiplying and laying eggs in their intestine. This leads to local inflammation that can damage to the intestines etc, competition for nutrients leading to malnourishment and significant negative impact of physical, cognitive and even psychosocial development.

Reduction in school attendance, physical activity level and academic performance in school have all been demonstrated at population level as outcomes of concern associated with worm infestation in school age children. Some patients may manifest with pneumonitis due to worm migration in the lungs and intestinal obstruction following high infestations with some requiring surgical interventions.

Treatment following confirmation of infestation after demonstration of the worms or their eggs in stool require the use of oral anthelminthic. Some anthelminthic work for several worms, while some particular worms will require specific medications. Most of the drugs work by Mechanism of action, blocks glucose uptake resulting in paralysis of worm followed by death or expulsion.

Considering it’s predominantly feco-oral ( i.e stool to mouth) route of transmission, improving hygiene represents one of the best strategy as per control of measure. Thus hand washing, finger nails hygiene, toilet hygiene, hygienic disposal of feces, washing of vegetables or fruits before eating, eating only properly cooked meals, avoidance of bare foot walking on potentially contaminated soil amongst others. Some outdated practices like the use of human excrements as manure by famers  should be thoroughly discouraged through proper farmer education and active provisions of options like  fertilizer inputs  etc.

Though worm infestation is typically not life-threatening in most cases, it can lead to clinical problems as earlier stated. As such regular deworming is recommended especially in children and also in Adults. Open defecation and unhygienic handwashing practices which leads to the spread of these parasitic worms definitely require push back efforts. In communities with a prevalence of >50% Children >2yrs should be dewormed every 6 months, while for communities with prevalence of 20 to 50%   deworming of children can be done once yearly. Children aged 12 -24 months may benefit from deworming especially if shown to have worm infestation. Adult (because everyone is susceptible to infestation) should also be offered anti-helminthics if indicated.

▪︎ Dr. Ebuta is the Vice President, Medical Initiative for Africa. He can be reached at agborebuta@yahoo.com

A Reason to be Cheerful