Nigeria’s battered image in the management of the Fulani militia killings will get further drubbing, Friday, as angry indigenes of Plateau State plan to take to the streets wearing black in Washington D.C., New York, and Atlanta
The protest comes as State Governor, Simon Lalong, told a visiting US Embassy delegation that the troubled State remains a home of peace and tourism.
But a non-governmental organisation, Stefanos Foundation, rolled out fresh figures to show that a higher figure, than what was initially thought, died in the killings allegedly perpetrated by the gun-totting Fulani militia backing aggrieved herdsmen.Stefanos put the figure at 233.
Reprisal killings by natives of Barkin-Ladi, Riyom, and Jos South Local Government Areas (LGAs) are believed to have led to additional deaths. The pattern spreads across Plateau, Benue, Adamawa, Taraba, Kaduna, Kogi, and Zamfara States.
Federal Government and Presidency’s explanations of the killings have worsened matters. From blaming foreigners, to pleading with natives in these States to accommodate herdsmen, and blaming opposition politicians; it climaxed in the suggestion by presidential spokesman, Mr. Femi Adesina, to natives to avoid the risk of dying by leaving their ancestral land to the marauding group.
Details of the planned protests in the US cites, available on social media reads: 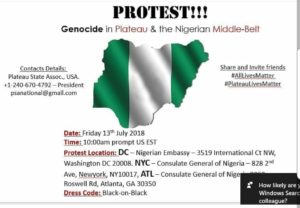 In Jos, visiting US delegation led by Deputy Head of Mission, Mr. David Young, told journalists his country was worried at the violence. The US is a strong ally of Nigeria. Its President, Donald Trump, told President Muhammadu Buhari, during a visit last month he was worried over persecutions and killings, especially of Christians.
Said Young in Jos on Tuesday: “It is very essential to address the issue of impunity. The law enforcement agencies will have to react very quickly to get to the scene to prevent an escalation or even more horrific violence from happening. It is important for law enforcers to be well trained. They have to be well paid and they have to be ready to respond to emergencies,” he said.
He called for peace building while praising a Haua Fulani Imam who shielded residents in a mosque to prevent retaliatory attacks targeted at them.
Frowning at the pattern of having Christian and Muslim neighbourhoods, the diplomat added, ‘‘That kind of segregation creates suspicion. This leads to prejudice and hate speech. I think it is important for people to make human interactions and human connections as part of peace building.”