President Muhammadu Buhari may not be bothered with the politics of re-election for now, concerning himself only the matters of state regarding the economy and security, but his foot soldiers are at work on the political front.
His campaign organisation, headed by Minister of Transport, Mr. Rotimi Amaechi, on Monday announced a spokesman, Mr. Festus Keyamo SAN, for the 2019 campaign.
On the same day Keyamo letter was being penned, President Buhari was telling British Prime Minister, Theresa May, “We have elections next year, politicians are already preoccupied with the polls, but I am bothered more about security and the economy.”
An obviously elated Keyamo posted his appointment on his Twitter.
His tweet reads: “With this letter below👇, I have just been appointed the Director, Strategic Communications (Official Spokesperson) for the President’s 2019 Presidential Campaigns. I will be making a formal statement on this much later.” 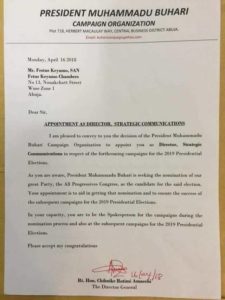