Source: www.inecnews.com
Seven Resident Electoral Commissioners (RECs) were Tuesday sworn in at the Independent National Electoral Commission’s (INEC) headquarters in Abuja, the Federal Capital Territory (FCT), with the Commission’s Chairman, Prof Mahmood Yakubu, urging them to be firm and courageous on the side of the law at all times.
They include Mr Segun Agbaje, Mr. Baba Abba Yusuf, Dr Uthman Abdulrahman Ajidagba, Mr Yahaya Bello, Dr Emmanuel Hart, Mr Mohammed Magaji Ibrahim and Dr Cyril Omorogbe. Both Agbaje and Yusuf were reappointed while the other five are fresh appointees. 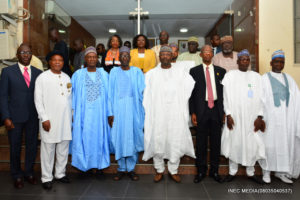 After congratulating them, the INEC Chairman promptly listed the series of upcoming elections before the Commission. According to him, in addition to four bye-elections to fill the vacancies in Takum State Constituency in Taraba State, Lokoja/Koton-Karfe Federal Constituency in Kogi State, Bauchi South Senatorial District and Katsina North Senatorial District, the Commission also has to conduct two governorship elections in Ekiti and Osun states. He added: “Similarly, and as you are aware, we have only 304 days to the 2019 General Elections,”
Prof. Yakubu also informed the RECs that as part of its preparations for the next General Elections, the Commission embarked upon the Continuous Voter Registration (CVR) exercise nationwide.
His words: “For the first time in the history of our elections, citizens who have attained the age of 18 years and those who could not register before the last General Elections now have the opportunity to do so on a continuous basis as provided for by the Electoral Act.
“The exercise is conducted at designated centres nationwide on quarterly basis. We have also devolved the registration to Ward level in Ekiti and Osun states, ahead of their governorship elections.”
The INEC Chairman noted that the Commission was aware that citizens who registered in the first quarter of this year were anxious to know when they can collect their Permanent Voter Cards (PVCs). “We have consistently reassured the public,” he averred, “that for those who registered in 2017, their PVCs will be available for collection in the first week of May.
“Those who registered in the first quarter of this year (January to March) as well as those who are registering right now in the second quarter of this year will collect their cards thereafter. We want to reassure all new registrants as well as those who applied for replacement of cards and transfers, that their PVCs will be available for collection ahead of the 2019 General Elections. For those who registered in Ekiti and Osun states in 2017 and 2018, priority attention is being given to the production of their PVCs, such that all the cards will be available ahead of the July 14th and September 22nd governorship elections.”
Prof. Yakubu also informed the RECs that they would be responsible for the implementation of the Commission’s policies, just as they would exercise supervisory control over personnel, resources, legal and administrative processes in the states to which they are posted.
He affirmed that they could be posted to any part of the country at any time as required, but for now, they would be posted to states within their respective geo-political zones. He however asserted that none of the RECs would be posted to his state of origin throughout his tenure.
Prof Yakubu further advised the RECs: “As election managers, you must maintain the required openness and consultation. At the same time, you must be very firm and courageous on the side of the law as well as our regulations and guidelines at all times, as required of an unbiased umpire.
Speaking on behalf of his colleagues, Agbaje pledged that the new appointees would do all that is required to attain the Commission’s set goals and carry out their assignments with integrity.