Dogara, Senators, others pick up hospital bills in Bauchi university 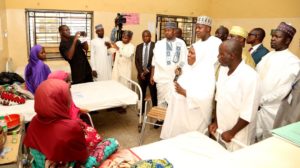 Visiting Dogara and others

Dogara visits ATBU Teaching Hospital, settles medical bills of patients
By Turaki Adamu Hassan, Special Adviser (Media &Public Affairs)
Speaker Yakubu Dogara of the House of Representatives, on Friday, visited Abubakar Tafawa Balewa Teaching Hospital, Bauchi, where he paid medical bills of patients running into millions.
Dogara, accompanied by Senators Suleiman Nazif, Ali Wakili and over 50 members of the House of Representatives from across the country  empathised with patients in different wards in the 700-bed hospital.
The Speaker said the purpose of his visit to the hospital was to extend support to people in need, especially in the face of the economic recession the country is going through and as part of his free medical outreach to his people which he started last year.
He also used the opportunity to assess the facilities in the institution.
Speaking when he met with the management of the hospital after a tour of the hospital wards, he said, “For us, health is very, very important and it has been said by those who can speak very well that health is wealth. As a matter of fact, if you put money in the hands of a sick person, the money diminishes, so it means health is the foundation of wealth itself. So that’s why we decided that this will be our first port of call. Not because of anything, but because of the situation we are in as a country, coupled with the fact that we are just smarting out of a very biting recession. We know the condition in which most of the patients will be in and if you recall, just last year I had cause to send a team of medical doctors who stayed here for over a week in order to attend to the health needs and challenges of people across Bauchi State. And we had people  Kano, Yobe, from the report I got, and Gombe, Plateau and other neigbouring states. Thousands of operations were successfully carried out.
“So it in that spirit that we came here again, realising that health is wealth and the fact that the bulk of the people who are here, really, constitute our support base as a party, so it became absolutely necessary for us to pay this visit so that we can assess the facilities here and the working condition in this institute.
“I’m happy also to announce that in view of the fact that we are putting a lot of priority on health, I was able to secure some level of funding for this institution and Federal Medical Centre, Azare, which are the only federal institutions that we have. I summoned the two chief medical officers,  we mer in my office in Abuja. I have handed over the allocations to them. It is now up to them to decide which critical areas they will use the money to intervene and we are waiting for them so that as soon as possible, the projects in Federal Medical Centre, Azare and ATBU teaching hospital will be executed.”
Moved by the plight of some patients he met and interacted with in the wards during his tour, the Speaker pledged to personally offset the bills of five patients which stood at N1, 266,600m. This is in addition to N2.5m which the members of the National Assembly and members of the Speaker’s contigent donated  to offset other bills of patients at the hospital.
“Let me say that since we have seen this and paid this visit, we had cause to appeal to some of our colleagues, together with our contigents from Bauchi State in the National Assembly, that is our Senators and entire membership from the House of Representatives, including few of our colleagues who responded, we were able to put together, may be more may come, I don’t know till we get back to Abuja, we were able to put together, the sum of N2.5 million to assist patients. It is not for the hospital, it is for the patients. I don’t know how you will do the mathematics.
“Then, when I was going round, I made promises and in line with our upbringing, as true sons of Bauchi, we don’t lie so I will make sure that these promises are redeemed. There is a case, I think a case of cancer treatment for about 19 weeks,  we are making it 20 weeks and that gives us N500,000, then there is case of broken leg of N300, 000, there is another broken leg of a man whose son was discharged and asked to go and look for money but he came back. We have told him that his son will be released today so he should be discharged. The bill of N200, 000 will be settled by my good self. We have another case of kidney,  N66, 600. That one too we will settle, and then the police officer that was shot on duty N200, 000, we will settle. So that brings us to a total of N1, 266, 600.”
Earlier, the acting chief medical officer of ATBU teaching hospital, Bauchi, Dr Abubakar Said Kadas commended the speaker for his continous supprt to the hospital and urged  him to continue to help them with funding of their projects.

As Atiku, Tinubu bicker over health, Obi says the ‘sick’ should not...