Investigations have commenced into how a portion of a proposed five-storey building within the Vehicle Inspection Office complex in Mabushi District of the Federal Caital City of Abuja came crashing last Monday.
Wednesday, the complex, which is less than 300 meters from the office of Minister of Power, Works and Housing, Mr. Babatunde Fashola, played host to investigators from Nigeria Building and Road Research Institute (NBRRI), who took away samples of rods and concrete from the collapsed section of the structure.
The collapsed section, which an expert said was a “formwork failure” as opposed to a building collapse is on the first floor of the proposed five floors.
Said an insider, “The people came and they said the collapse is not a structural one; it is as result of a weak base. They had already prepared and put the bamboos which has been there for over a year. They placed load on it and it gave way. The engineers came for the inspection, the NEMA people came. The consensus is that it is not a structural defect.
“The NBBRI came with their equipment. But there is yet to be a report from them. They took away samples of the rods used and some concrete samples.”
Last Monday, workers of the vehicle inspection agency watched in horror and embarrassment as part of their own building under construction failed the litmus test of inspection and came crashing.
They became the butt of jokes of motorists in Abuja that they could not get their own house in order, but constantly harrassed vehicle owners.
In at least two states, Kaduna and lately Lagos, they have been sent off the roads because of their nuisance nature; while in Abuja, an extant circular not to inspect vehicles between the hours of 8.00 a.m. and 10.00 a.m., and 4.0p.m. and 6.00 p.m. is often disobeyed by the officers. 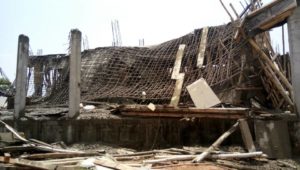 The collapsed structure on Monday.