Pounding for Zamfara Governor. Praises for Senate over Meningitis

***If it is as a result of sins, why is he and his fellow travelers in the corridors of power in all tiers of government still alive? It was a foolish and uneducated comment by a false prophet of doom.” 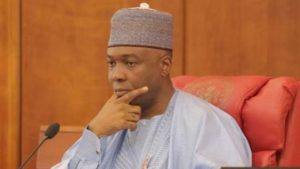 Comments by Governor Abdulaziz Yari of Zamfara State that the outbreak of Type C Cerebrospinal Meningitis in the country was the consequences of sin has elicited angry reactions with some wondering how he escaped being infected.
The social media, mainstream radio stations, especially Frequency Modulated (FM) stations have continue to pound the Chairman of the Nigeria Governors Forum (NGF) for his less than decorous and unguarded comments.
His pounding is a stark difference for the encomiums being poured on the Senate for its resolution asking that vaccines for meningitis be given for free to Nigerians.
On radio, it was difficult to keep track of the vituperations poured on Yari by callers and On-Air-Personalities (OAP); but one by a caller stood out and summed up the anger of many for the Governor, accused of not been pro-active and on top of his responsibilities.
Mohammed Ibrahim, a caller, said, “If it is as a result of sins, why is he and his fellow travelers in the corridors of power in all tiers of government still alive? It was a foolish and uneducated comment by a false prophet of doom.”
But in a position that is rare for the Senate, which has come under intense attacks in the last few weeks, a coalition of over 40 Civil Society Organizations (CSOs), that works to ensure equitable access to vaccines in Nigeria, commended the 8th Senate for its resolution, which called for meningitis vaccination to be made free in public healthcare facilities across the country.
In a statement signed by Dr. Chizoba Wonodi, the national convener of the coalition – Women Advocates for Vaccine Access (WAVA) – the CSOs “noted with pleasure, the motion on the floor of the Senate calling for free Meningitis C vaccination for all Nigerians.”
The group noted that the timely response of the Senate and its readiness to approve a supplementary budget to enable the executive tackle the menace shows that all relevant stakeholders are “responding to the epidemic by ensuring adequate coordination, awareness creation, social mobilization, case management, infection prevention and control, active surveillance, and reactive vaccination in the affected States.”
The National Convener of WAVA, Dr. Chizoba Wonodi said: “My heart bleeds for all Nigerians who have lost loved ones or have been hospitalized following the meningitis outbreak in the country.
“We at WAVA are however, consoled by the fact that all arms of government are working together to deal with the outbreak decisively. The resolution by the Senate to support free Meningitis C vaccination and supplementary appropriations to procure the vaccines is highly commendable.
“We urge the National Assembly to go further and appropriate sufficient funds for all vaccines as Nigeria transitions from Gavi support. We laud the efforts of the Federal Ministry of Health (FMoH), the National Centre for Disease Control (NCDC), the National Primary Health Care Development Agency (NPHCDA), the state governments, the World Health Organization and other partners who are dealing with this outbreak.”
Hundreds are known to have died, but other unofficial estimates put the figures at over a thousand because of inaccessibility to many rural parts of the northern states struck by the disease.
Zamfara State Governor, Alhaji Abdul’aziz Abubakar Yari, whose state is worst hit in the number that have given up the ghost in the latest meningitis onslaught had this to say: “What we used to know as far as meningitis is concerned is the type A virus. The World Health Organization, WHO, has carried out vaccinations against this type A virus not just in Zamfara, but many other states.
“However, because people refused to stop their nefarious activities, God now decided to send Type C virus, which has no vaccination…. People have turned away from God and he has promised that ‘if you do anyhow, you see anyhow’ that is just the cause of this outbreak as far as I am concerned.
“There is no way fornication will be so rampant and God will not send a disease that cannot be cured.”
He disclosed that there are five million vaccines available worldwide with Nigeria getting 50,000.
“That is not enough for Zamfara people alone, not to talk of Katsina or Kano…. Our focus as a state now is to continue treating those who are infected with the disease, but as for vaccination, it has an international dimension.
“We have information that Nigeria will get the highest percentage of the 5 million doses available now. Apart from WHO, other International bodies such as the Bill Gates foundation and UNICEF are also currently focusing on how to tackle the outbreak.”
“The most important thing is for our people to know that their relationship with God is not smooth. All they need to do is repent and everything will be all right.”
“Leaders are doing their best by enlightening the populace and working assiduously for the good of all…your major assignment as a leader is to convey the message; you cannot go from house to House and arrest offenders for instance.”