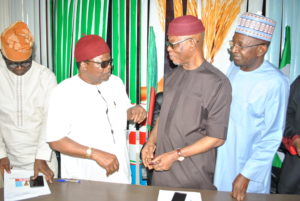 Desperate to pit its house in order, the ruling All Progressives Congress has set up two committees to resolve the crisis in two States, Kogi and Bauchi, where it holds the reins of power.
At the inauguration of the two committees, Wednesday, APC National Chairman, Chief John Odigie-Oyegun, said, “It is clear that in a few of our states, we have fairly serious issues to contend with – Kogi, Bauchi and to some extent in Kano. There are differences in a few other states but probably not of the magnitude that we have in these states. The Party’s National Working Committee (NWC) decided to select some of the very best that we have in this Party to help us unravel the problems in these states and also make serious reconciliation efforts.
“The problems are different in both states but of course the resultant is virtually the same. I specially want to thank all of you who have accepted the Party’s call to duty. As you can see, every single one of you have been specially chosen because you belong to the top cadre of the leadership of the APC and this is reflection of the seriousness with which the Party takes the disputes in these two states.
“In Bauchi state, we have the differences between the state administration and most of the representatives of that state in the National Assembly.
“Kogi is an equally very challenging assignment in the sense that it has a history behind it.  The circumstances that led to the emergence of the Governor of Kogi State has also to be considered a factor. The unfortunate manner of the transition of the leader in that state also has a bearing on it. So it is not only an emotional situation, it is also a highly sensitive situation that you are going to confront… It also has very serious implications of Party discipline in Kogi because we have the unusual situation of a Party pitting itself against its own government.”
Labour Minister, Senator Chris Ngige, and party chieftain Prince Tony Momoh Chair the two 10-Member Fact-Finding And Reconciliation Committees for Kogi, Bauchi States
Momoh chairs the Kogi Committee with Gen. John Shagaya, Sen. Barnabas Gemade, Gen. Ahmed Aboki and Sen. Olubunmi Adetunbi as members.
The Bauchi state fact-finding and reconciliation committee is chaired by Ngige. Committee Members are: Gen. Lawrence Onoja, Sen. Oserheimen Osunbor, Gen. Lawal Jafar Isa and Alh. Gambo Magaji.
While thanking the Committee members for accepting the assignment, the APC National Chairman said the calibre of personalities selected for the assignment was a reflection of the seriousness with which the Party takes the disputes in Kogi and Bauchi states.
APC National Working Committee (NWC) members present at the meeting included: Deputy National Chairman (North), Sen. Lawal Shuaibu; National Vice Chairman (South South), Prince Hilliard Eta; National Vice Chairman (South East), Hon. Emma Eneukwu; National Treasurer, Alh. Bala Mohammed Gwagwarwa; National Auditor, Chief George Moghalu and National Organising Secretary, Sen. Osita Izunaso.