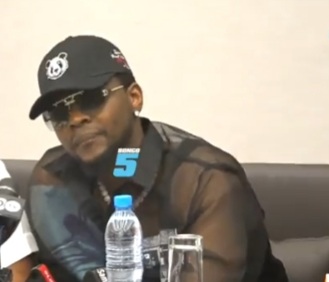 🙏🏿 Kizz Daniel apologizes to Tanzanians, and explains what transpired (1) pic.twitter.com/73sRLgqXuh

(Above: A twitter thread of his explanation at a press conference)

Nigeria’s entertainment rave of the moment, Oluwatobiloba Daniel, popularly known as Kizz Daniel, is remorseful and full of apologies for disappointing his Tanzanian fans, and has fixed Friday for a makeup show for them.

He apologised for not showing up for his gig on stage, but is telling a somewhat different story from that of the show’s promoter.

Show promoter, Stephen Uwa, had said he paid $60,000 to the music star and pleaded with him for over five hours to no avail.

“He only said the airline didn’t bring his bag. That is why he could not perform because his gold chain is not there and he had a gold chain on his neck. He wanted everything.

“I bought him different clothes but he said just because the airline didn’t bring one of his bags, he cannot perform without his gold on his neck.”

But on Tuesday, at a press conference, Daniel said: “The people were already going wild; the fans were going wild, which I know was out of love. So no disrespect to the fans… I was asked to stay back. ‘You can’t go’, ‘It’s not safe’.

“So I said ok. I sat down with the team, the organisers, the promoters; let’s come up with a way to make it up to the Tanzanian fans and we decided to do a makeup show for free.

“I even agreed to partner with them this time around. This Friday, a free show; I will be partnering with Straight Up Vibes to make that happen.

“I must apologise to the fans. None of this was intentional.”

It is not yet clear if Kizz Daniel would use the advertised venue for last Sunday’s cancelled performance, the Warehouse, Old Nextdoor Arena in Tanzania, or a bigger venue, since the new concert is for free.

Recall that Daniel was picked up for questioning by the Tanzanian Police as a fall-out of the disappointment by fans, and damage to property suffered by organisers, but other parties stepped in to effect his release.

The musician, whose Buga lyrics has caught so rapidly among the young and the old is on an Afro Classic World Tour.