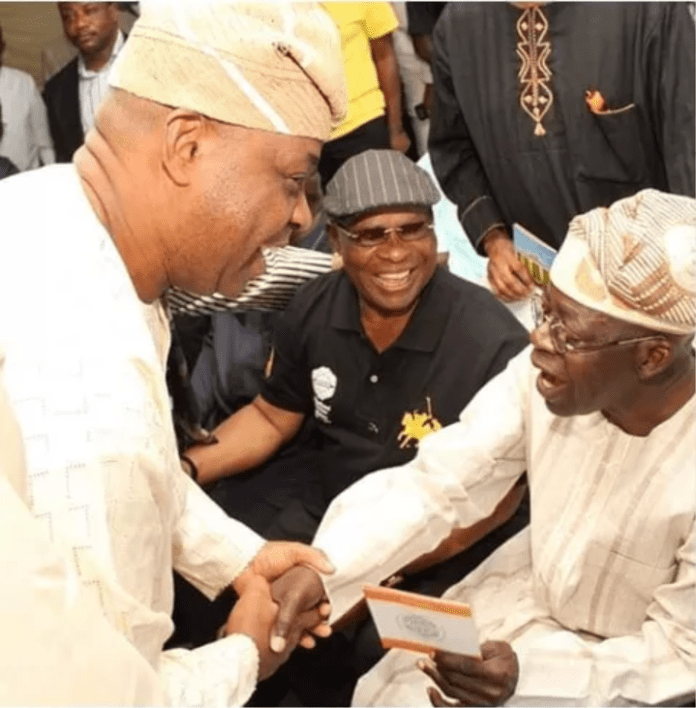 Tinubu, according to We-Blogs Africa, asked Dr Adeleke to stop spending on his brother’s ambition and ensure that his cousin, Alhaji Adegboyega Oyetola, the incumbent governor, is returned for second term.

The report claimed that Tinubu who struck the deal before jetting out to Paris, the capital of France had already placed on the table a sum of $75.5million, an equivalent of N50billion and a working document to boot, aimed at ensuring support for his brother in the state governorship race in 2026.

An impeccable source was said to have told newsmen that in the meeting which took place at Banana Island in Lagos, Tinubu asked two friends of Dr Adeleke, Alhaji Aliko Dangote and Mr Femi Otedola to be part of the negotiation.

He also brought into the picture, the governor of Kano State, Abdulahi Umar Ganduje while promising Dr Adeleke that everything would be done to protect his business interests across the country.

The APC presidential candidate who insisted Oyetola would win re-election was said to have told Dr Adeleke that he wouldn’t mind if the Senatorial Candidate of APC in the Osun-East Mr Amidu Tadese Raheem is replaced with his brother as an assurance that 2026 ticket is secure for him.

Tinubu was quoted in the meeting to have said that “You are from the progressive family. Your father was one of us in the UPN and indeed a Senator when Baba Awolowo was here and we were together in the SDP back then with your late brother. I was a senator when Alhaji Isiaka Adeleke was the first governor in Osun state.

“When we needed second term for Rauf (Aregbesola) your family rendered all the support and we got it. And we offered him Senatorial ticket. We wouldn’t have had any problem with your late brother if not because of Rauf. The same Rauf and his people are causing problem for us in Osun.

“My Chairman, the little I released is to cover some of your expenses. But you know my position in Osun state and I can’t afford to lose any state in the South-West. But we don’t need to go to war for that although I am a warrior. Tell Ademola that we will ensure we treat your people well”, he stated.

Dr Adeleke reportedly thanked Tinubu, telling him that as the Asiwaju Yoruba it will be difficult for him to say no to his request, while adding that he will know how to handle the matter back at home because of the hundreds of supporters of his brother. (We-Blogs Africa powered by Phoenix with significant edits to headline and body text)

▪︎ By The Conclave