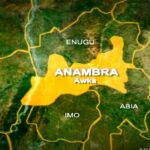 The hoodlums also left the politician’s only son critically wounded after he was reportedly shot in the stomach during the attack.

The kidnapped politician was a Special Adviser to former Chairman of Nnewi South LGA.

Ikengaonline gathered that the hoodlums stormed the Umudiji Umuohama village in their numbers in the early hours of Saturday.

A source from the community said the incident occurred a little after midnight, adding that the rampaging gunmen shot their way into the compound.

The source claimed the gunmen were angered following the victim’s reluctance in opening the gate for them.

“They forced their way into the family compound. The only son who was brutally shot in the belly has been rushed to the hospital where he is receiving treatment,” the source added.

Members of the victim’s church, St Andrew’s Church Umuohama, Ukpor, organised special prayers for his release and the quick recovery of his only son.

When contacted, Police Spokesperson, Tochukwu Ikenga, said he was yet to receive the report but promised to get back to our Correspondent.