While its publisher and activist politician, Mr. Omoyele Sowore, still remains in detention, amid allegations by his lawyer that there is fresh plot to keep further in detention by filing of new charges against the #RevoltionNow campaigner, Sahara Reporters has released footage of journalists and other activists been dispersed with teargas and gunshots into the air by Department of State Services (DSS) operatives outside the walls of DSS headquarters, also known as The Yellow House, in the Maitama District of Abuja. 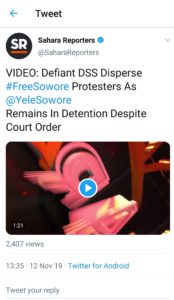 The activists were protesting the continued detention of Sowore and another activist, Mr. Olawale Bakare, despite a Thursday court bail and a declaration of intention by the DSS last Friday to obey the court’s release order. 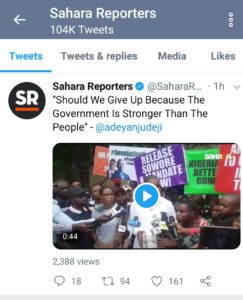 The activists on Tuesday also alleged in another video they were induced with an alleged bribe not to protest. Led by an activist, Deli Adeyanju, they did not give the name of the bribe-giver.
Another photo trending on social media showed The photograph of The Guardian reporter, Mr. Oludare Richards, allegedly bloodied and bruised by operatives in the clash. 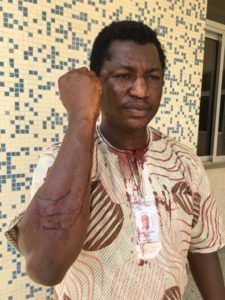 Mr. Oludare Richards of The Guardian

The Department of State Services (DSS) gave the impression last Friday night that it was ready to release Omoyele Sowore but had no one to hand him over to.

Another activist who was also granted bail like him under stringent conditions, Mr. Olawale Bakare, is still in detention. Both are facing trial over alleged plans to overthrow President Muhammadu Buhari through a campaign dubbed #RevolutionNow.

They were not released to lawyers and other activists who were there to pick them up on Saturday. The activists staged a protest near the DSS premises over the non-release of the men. Sowore has been in detention since August, and this is the second bail he is getting in three months to no avail.

And no reason has been given for their continued incarceration. A phone call to DSS spokesman, Dr. Peter Afunanya, on Saturday was not picked. He also did not reply to an SMS seeking to know if Sowore had been released.

The Executive Secretary of the National Human Rights Commission, Mr. Tony Ojukwu, warned in a statement on Saturday that disobedience to court orders is a recipe for citizens employing self-help to get justice.

“Many cases have been reported to the commission about investigating police officers and state security officers deliberately refusing or delaying to verify bail conditions following court orders just to punish suspects unduly for reasons that are not constitutional.

“The constitution guarantees the innocence of every citizen of Nigeria until proven guilty by a court of competent jurisdiction.

“A situation where the order of courts are continuously disobeyed by security agents makes such security agents judges onto themselves and such situation does not augur well for our democracy based on separation of powers and rule of law.

“It makes the law uncertain at any point in time and leads to loss of confidence of the people in government and state institutions of which the judiciary is one.

“A situation like this can also lead to self-help thereby creating more problems for law enforcement agents and threaten the precarious situation of state responsibility to respect, protect and fulfill human rights in the country.”

Nigeria Everyday  reports that the Department of State Services (DSS) said on Friday night that no one had come to take Sowore, from its custody since the agency got the court order for his release.

“I will send two lawyers to pick them up tomorrow morning, I have just seen their statement,” he said

In a statement, the spokesman for the secret police, Dr. Peter Afunanya confirmed that it has received the Court Order for the release of Omoyele SOWORE.

He adds: “It is important that the public notes that since the receipt of the Order, no person has turned up at the DSS to take delivery of him. This becomes imperative for reasons of accountability.

“However, the Court has been properly briefed on this development and the steps being taken to ensure compliance with its Order.

“The Service, under the leadership of Yusuf Magaji Bichi (fwc), as the Director General, is not a lawless organization and will never obstruct justice or disobey Court Orders.

“It, therefore, affirms that it will do all that is needful once the appropriate processes have been concluded.”

No word has been heard about the hunger strike embarked on a hunger strike by Sowore since Thursday over the refusal of the State Security Service (SSS) to set him free after meeting his bail conditions.

Rat holds up flight in India for 12 hours