Copyright 2021 - All Right Reserved
Home News I have not stepped down, says Maku; gets Eggon people’s endorsement
NewsPolitics

I have not stepped down, says Maku; gets Eggon people’s endorsement

Former Minister of Information and Governorship candidate of the All Progressives Grand Alliance (APGA) in Nasarawa State, Mr. Labaran Maku, has denied reports that he has stepped down for the Peoples Democratic Party’s (PDP) candidate in coming Saturday’s election.
Maku debunked a statement making the rounds on social media that he stepped down for David Emmanuel Ombugadu of the PDP.
Maku told Nigeria Everyday (www.everyday.ng) on phone: “We are in the era of fake news and criminals who pretend to be politicians.
He said the fake statement was “posted by PDP and APC people in Nasarawa because they know that there is no way they will win if I am in the race… that is how criminal the situation has become”.
He added: “That is how criminal things have become in this country…there are many people in this politics that ought to be in jail”. 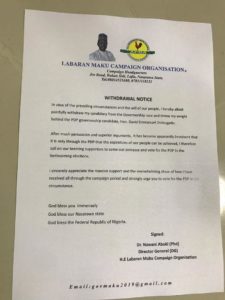 The fake statementallegedly signed by the Labaran Maku campaign director, Nawani Aboki reads in part: “After much persuasion and superior arguments, it has become apparently imminent that it is only through the PDP that aspirations of the people can be achieved, I hereby call on our teeming supporters to come out enmasse and vote for the PDP in the forthcoming elections”
Meanwhile, according to a News Agency of Nigeria (NAN) has reported that the Eggon Cultural and Development Association (ECDA) of Nasarawa State has endorsed Labaran Maku as its sole candidate for the March 9 elections.
Wilberforce Alaku, the National President of ECDA, disclosed this to newsmen on Thursday at the palace of Aren Eggon in Nasarawa-Eggon Local Government area of Nasarawa State.
“It is not my decision, but unanimous decision of the National Representative Council (NRC) of ECDA having received the report of a committee set up on the issue.
“We have set up a committee chaired by Professor Francis Akwash, a lecturer with Nasarawa State University, Keffi, and they have submitted their report which ECDA has endorsed,” he said.
Alaku said that Maku was selected out of four Eggon sons contesting for the position.
He listed the other aspirants to include Emmanuel Ombugadu of Peoples Democratic Party (PDP), Abdullahi Agibi of Labour Party (LP) and Matthew Ombugaku of Rebuild Nigeria Party (RNP).
Alaku, therefore, called on the Eggon people and the general public to vote en masse for Maku in Saturday’s gubernatorial election.
Responding, Maku expressed gratitude to the ECDA for selecting him and promised to carry everybody along he wins the race.
He called on other Nasarawa communities to join hands with him in ensuring success in the forthcoming election.

PDP still has questions to answer over country’s wealth – Buhari