I am for free, fair elections – Buhari; many die as Rivers PDP wants Amaechi called to order

President Muhammadu Buhari Tuesday visited Yenagoa, Bayelsa State and Port Harcourt, Rivers State where he assured that he is all out for free, fair and credible elections starting on Saturday.
Speaking at a meeting with traditional rulers at the secretariat complexes of the Councils of Traditional Rulers of the two states, the President said:
“I assure you that I’m all out for free, fair and credible elections. The Independent National Electoral Commission, INEC knows my stand on this.
“Nigerians are assured of free and fair elections. Under this leadership, nobody will be allowed to intimidate other citizens. Nobody will be allowed to snatch ballot boxes and run with them. I will make sure that the votes count.” 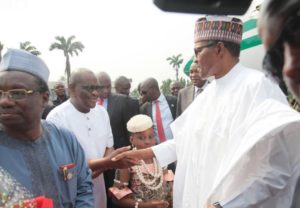 The President’s comments come as reports filtering in say that there were deaths as a result of a stampede at one of the gates of presidential rally ground.
Tell.ng reports people, mostly women, were crushed to death on Tuesday at the pedestrian gate of Adokiye Amiesimaka Stadium, Port Harcourt as thousands of party supporters struggled to leave the stadium when the presidential campaign rally of the All Progressives Congress, APC was drawn to a close.
Others sustained serious degrees of injuries during the stampede, which eyewitnesses said happened when the police guarding the pedestrian gate blocked one side of the gate with their patrol van and tried to force back the surging crowd.
The police left the scene soon afterwards leaving rescue operations to members of the public. It took up to an hour after the incident before some ambulances came by.
The ambulances, Tell.ng added, took away corpses while those that survived continued to receive support from members of the public, who tried some life sustenance methods on them.
Also, in Port Harcourt, the Rivers State chapter of the Peoples Democratic Party, PDP, wants the security agencies and other relevant agencies to keep record of all the threats and inciting comments of the Transportation Minister, Chibuike Rotimi Amaechi on the 2019 general elections in Rivers State.
Bro Felix Obuah, the State PDP chairman raised the alert against the backdrop of Amaechi’s unequivocal threat at the APC presidential rally Tuesday at Adokiye Amasiemaka Stadium, Port Harcourt where he, (Amaechi) said he was relocating to Rivers State for a fight during the election.
Amaechi, according to the State PDP chairman may not be alone in this plot as another APC chieftain in the State, Tonye Princewill, had earlier hinted that the APC would be lawless during the elections in the State.
“A stitch in time saves nine,” Bro Obuah noted
President Buhari commended the introduction of the Permanent Voters Card, PVC and Card Reader, and urged the nation to embrace the technology, arguing that without it, the sixteen years of misrule by the Peoples Democratic Party, PDP would not have been brought to an end.
“In 16 years, the PDP thought nobody could remove them from office. The introduction of the PVC and Card Reader made sure that our votes counted in 2015 and the votes of Nigerians will count in 2019,” he stressed.
On the issue of security, the President repeated his commitment to ensure the protection of lives, property and the territorial integrity of the nation, while urging the traditional rulers to play their part as expected of them.
“The question of security begins with you,” the President told the royal fathers, even as he commended them for calming down the restive situation in the Niger Delta.
“Through you, we have been able to persuade the militants to change their attitudes. I congratulate you on the roles you played that stabilized the security and the economy of the country,” he said.
Governor Seriake Dickson of Bayelsa State, at the reception commended President Buhari for his statesmanship and love for the country.
On his part, Governor Nyesom Wike of Rivers State called for a peaceful conduct of the elections.
The Chairman of the Bayelsa State Council of Traditional Rulers, His Majesty Alfred Diette-Spiff, who commended the President for the appointment of citizens of Bayelsa into key positions and the infrastructure projects being put in place, added that the state deserved more.
His counterpart in Rivers State, Dr. Dandeson Douglas Jaja, King Jaja of Opobo, while calling for free and fair elections, also appealed to the President to ensure that security agents remained non-partisan throughout the exercise.
Buhari mourns the dead in Rivers
Also yesterday, the President’s spokesman, Garba Shehu, issued a staement on the President’s reaction to the death of his supporters in Port Harcourt.
The statement reads: ‘President Muhammadu Buhari has just been briefed about the tragic death of some members of the All Progressives Congress (APC) members in a stampede at the presidential campaign rally held in Port Harcourt, Rivers State, on Tuesday.
‘President Buhari is deeply saddened by the tragic loss of lives and extends deepest condolences to the families and friends of the victims. He also wished a speedy recovery to all those injured.
‘The President described the deaths as “needless loss of lives and an anti-climax to a highly successful outing” in the oil city that could have been averted if there was an orderly exit from the Adokiye Amiesimaka Stadium.
‘“It is indeed a great tragedy that Nigerians who have important roles to play in shaping the future of the country and had come to see and hear from us how hard their government is working to build a Nigeria of their dreams, would meet their end in this unfortunate circumstance.
‘“I assure the people, with all sense of responsibility, that the party and the government will do everything possible to ensure the well-being and safety of our citizens as they troop out to attend rallies and all other political events,” the President said.
‘President Buhari assured the government and the people of Rivers State as well as the affected families of the support and prayers of the Federal Government during this difficult time.
‘The President prayed Almighty God to repose the souls of the deceased.’