Copyright 2021 - All Right Reserved
Home Politics FG: Atiku has questions to answer over Bank PHB; It is laughable and trumped up, says PDP
Politics

FG: Atiku has questions to answer over Bank PHB; It is laughable and trumped up, says PDP

Following alleged fresh evidence that the Peoples Democratic Party (PDP) presidential candidate and former Vice President Atiku Abubakar, benefitted from slush funds that led to the collapse of Bank PHB, the government is looking to question him.
But Information and Culture Minister, Alhaji Lai Mohammed, told State House correspondents that this did not mean Atiku would be arrested if he returned from his visit to the United States of America..
“It started from an internal memo dated 13 January 2009 asking that a draft in favour of Atiku Abubakar of N156 million should be raised…. We want him to stay in the US for as long as he wants but he has to explain to Nigerians when he returns….We are not perturbed one bit. He can go ahead and get a U.S. green card. That will not save him from imminent defeat in the forthcoming election” the minister said.
Claiming that the government was not bothered about Atiku’s trip to the US, he noted that the election for Nigeria’s highest will be holding in the country and not in the US. 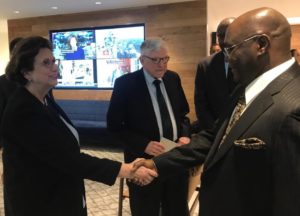 But the Atiku campaign team has fired back, describing the accusation as trumped up charges, and dared the government to arrest Atiku on his return.
According to Kola Ologbondiyan, the Director, Media & Publicity, PDP Presidential Campaign Organization (PPCO), the government accusation is laughable and “out of fear that he (Atiku) is already coasting to victory in the February 16 Presidential election.”
He adds: “The PPCO makes bold to state that Atiku Abubakar has nothing to do with the alleged issues leading to the collapse of Bank PHB, but an honest and hard working Nigerian who has no skeleton of any sort in his cupboard, unlike President Buhari, who is now entangled in series of corruption allegations.
“The world already knows that this attempt to mudsling our Presidential candidate is coming out of President Buhari’s frustration over Atiku Abubakar’s successful outing in the United States, for which the Buhari Presidency has gone into full hallucination.
“The PPCO however, counsels President Buhari and the APC to note that Nigerians can see through their lies, fabrications and frustration and that their scheme against Atiku Abubakar is already dead on arrival.
“If anything, the PPCO will want President Buhari to open the books and provide explanation for the N9 trillion stolen under his watch as Minister of Petroleum Resources as detailed in the leaked NNPC memo.
“President Buhari should as well, allow an open inquest into the alleged involvement of his relations in the N1.032 trillion alleged corrupt acquisitions in 9Mobile and Keystone Bank PLC.”