The Senate on Wednesday initiated investigations into the pipeline explosion that killed 150 persons in Abia State.
The Senate action comes as presidential candidate of the Peoples Democratic Party (PDP) Atiku Abubakar has commiserated with the people and government of Abia State over the fatal explosion in Umuimo and Umuaduru communities in Osisioma Local Government Area. He donated N10 million to the victims.
Angry Senators blamed the Nigeria National Petroleum Corporation (NNPC) and its allied agencies for the disaster which happened as villagers were
scooing oil from the leakage of a pipeline.
Senator Mao Ohuabunwa said, “I want to say it was a gory site. I saw human lives charred like rats. This is due to the negligence of PPMC and DPR. We have lost premium on human lives. This calls for serious investigation. The committee on downstream should investigate this.”
Senate President, Bukola Saraki said that it was time for government and Nigerians to show that lives matter in the country adding that it was negligence on the part of agencies led to the tragedy.
“Those who will finally agree to look into this matter should treat it with the seriousness that it deserves. The Committee on Petroleum Resources and Police Affairs should perform a proper investigation and recommendation,” he added.
“Let us have a report in two weeks and also find out what the Federal Government is doing about it.
A delegation led by the Vice Presidential candidate of the PDP and former Anambra State Governor, Mr. Peter Obi on behalf of Atiku Abubakar on Wednesday visited the affected communities in the company of Abia State governor, Dr. Okezie Ikpeazu and other officials of the state. 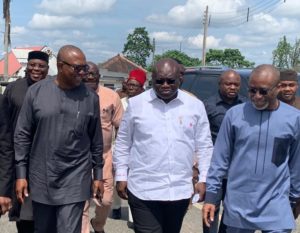 According to Obi, the news of the fire disaster was “very devastating and it is particularly touching that so many lives were lost to the incident.”
Obi, who undertook the visit on behalf of the PDP Presidential candidate and former Vice President of Nigeria, Atiku Abubakar remarked further that the fatal incident should raise the red flag for proper safety measures along all pipeline beds across the country.
He donated N10 million on behalf of the Atiku Campaign Organisation and conveyed the message of condolence of the presidential candidate of the PDP, Atiku Abubakar to the government and people of Abia State, praying particularly for families that lost dear ones to the incident to have the fortitude to bear the losses.
Other dignitaries that welcomed Obi included the Deputy Governor of Abia State, Sir Ude Oko Chukwu, Senator Enyinnaya Abaribe and Hon. Solomon Adaelu.