The Nigeria Army says only three members of Islamic Movement in Nigeria (IMN), known as Shiites, were killed when they confronted troops but the group says it actually lost 10 members in the clash at Zuba in the Federal Capital Territory on Saturday
The Army said two of its men were injured and are receiving treatment.
According to the IMN its peaceful religious procession of Arba’een from Suleja was intercepted by soldiers, adding that the procession was being rounded up for the day, when soldiers opened fire without any provocation whatsoever.
But the Army story was fundamentally different by the claims of the group.
A statement by the Commander Army Headquarters Garrison, Major General James Myam reads: “Troops of Army Headquarters Garrison on official duty escorting ammunitions and missiles from Abuja to Army Central Ammunition Depot in Kaduna State were attacked by some members of the Islamic Movement in Nigeria (IMN) sect at Zuba bridge, of the Federal Capital Territory (FCT) at about 3.00pm on Saturday 27th October 2018.
“The sect who were supposedly in a procession, established an illegal road block denying motorists free passage. When the troops’ convoy attempted to clear the road block, they met stiff opposition from the sect. Members of the sect used various objects to barricade the road and also pelted the troops with stones and other dangerous items. They smashed both military and civilian vehicles’ windscreens and windows.
“They also attempted to overrun the escorts to cart away the ammunition and missiles the troops were escorting. This led to the troops opening fire to extricate themselves. Consequently, troops of 102 Guards Battalion in whose Area of Responsibility the incident occurred rushed to the convoy’s rescue.
“Unfortunately, during the encounter 3 members of the sect were killed while 2 soldiers sustained various degrees of injuries and are being treated at a military medical facility.
“Meanwhile, normalcy has been restored in the general area and members of the public especially those plying the Abuja – Zuba Road are requested to go about with their normal activities with the assurance from the NIgerian Army that no individual or persons would be allowed to disturb public peace and unprovoked attacks against military convoys.”
But said IMN spokesman, Ibrahim Musa, “the fact that a similar Arba’een march was conducted in Kano along the Kano-Zaria highway for two days without any incident is enough a pointer to the peaceful nature of the annual religious rites. Similar Arba’een mourning processions are currently ongoing in Katsina and Kaduna states without any incident.”
IMN advised security agents to stop harassing its members, “since today is just the beginning of the peaceful mourning march on foot and it is expected that more people may join the mass peaceful march, which will culminate in the grand Arba’een day to be marked on Tuesday, October 30, 2018, the same day it would be commemorated worldwide.”
On Sunday, the IMN members were seen in parts of the Federal Capital Territory and Nasarawa State in peaceful marches. 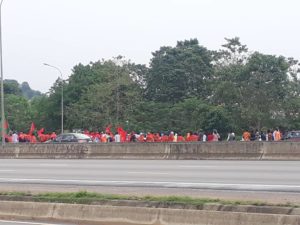 Fashola Should Stop Slandering Dr. Jonathan and Focus on Helping His Boss Look For His WAEC Certificate