The National Chairman of the All Progressives Congress (APC), Chief John Odigie-Oyegun on Monday charged newly-inaugurated APC State Chairmen on the re-election of the Party, particularly President Muhammadu Buhari in the 2019 elections.
“On your (State Chairmen) laps lies the onerous responsibility of returning this party to office for a second term. On your laps to a great extent also lie the return of our dear president to office so that the Change Agenda will have time to settle down to mature and become second nature to the people of our dear nation.” Odigie-Oyegun said while inaugurating returning and newly-elected State Chairmen at the Party’s National Secretariat in Abuja on Monday.
While urging compromise among party stakeholders, the APC National Chairman also named the Party’s Deputy National Chairman (North), Sen. Lawali Shuaibu to head the APC’s reconciliation efforts following issues that arose from recently conducted ward, local government and state congresses.
President Muhammadu Buhari last year named one of the leaders of the party, Asiwaju Bola Tinubu, to reconcile aggrieved members of the APC nationwide.
Said Odigie-Oyegun, Monday:“There is serious and immediate need for reconciliation. You have seen states like Oyo, Cross River, Delta, Taraba and even Lagos State. Don’t go back and say ‘we have won’. This is not a winner takes all situation. Political parties are not organised in that way. I have set up a team headed by the Party’s Deputy National Chairman (North) and he may have cause to invite some of the states in the next few days. 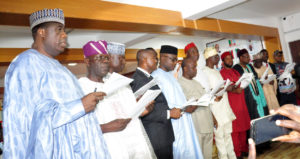 Cross section of APC State Chairmen taking their oath of office/allegiance at the Party’s National Secretariat in Abuja on Monday.

“It is something that must be done, and if possible, tidied up way before the National Convention. So that we will have as rancour-free a convention as is possible for any political party. Let me emphasise once more, there is need for reconciliation, give and take, compromise and I hope those sitting here will have the courage and expanse of spirit to embrace those we may think have technically lost out but are still important party members.”
While he expressed gladness over the mix of old and new members, the APC National Chairman equally described the newly-sworn in state executives as a “second generation of a maturing APC.” He added: “The new one will have the benefit of learning from the old and returning state executives.
The APC National Chairman urged the new state party chairmen to be abreast of major achievements being recorded by the President Muhammadu Buhari administration despite some conflicts within the party ranks, lean national resources and the inherited rot in the system.
“I know and I am aware of the extent of conflict within the party. We are all aware of the disaffection within the party caused to some extent by the reward system. We are also aware nationally of the disaffection out there amongst the people. These are to be expected. When we fought the battle, we had one target and we were representing the people of this nation who had decided they have had enough of that government. Now the narrative is different. We are up there, and we have become the target. So our approach will now be very different and you must now thoroughly ground yourselves on the achievements of this administration. And I want to tell you from the bottom of my heart that great achievements have been recorded.
“Yes we have issues today, yes we have problems today, yes in developmental terms, you cannot perform magic, but the certain assurance is that your government is on the right course. The certain assurance is that the firm foundation has been laid for a country that will now begin to grow and it can only accelerate.
“Inspite of lean resources, your government has been able to achieve much more in three years than any of its predecessors. That is something you can talk about and defend with actual achievements. What is important is the basic foundation of this nation which was totally destroyed by the past administration.” He said.
Odigie-Oyegun highlighted achievements in agriculture, infrastructure (particularly rail) and power generation.
“Today for many months we have achieved steady electricity production of 7000 megawatts. And by the time the other stations come onstream and the distribution system which is being upgraded is finally switched on, more and more of what we generate will start to reach our houses and the various industrial undertakings.
“Why is this important? It is critical and that is why when you look at past administrations, the $16bilion that was spent on power and we got nothing, you wonder if they truly love this country. How many people can government employ, very little. But if you supply the people with power, the blacksmith will employ people, the welder will employ people and by the time different small-scale industries employ, you would have almost solved the problem of this country. Power is critical and your government has taken very definite steps to address this problem.” He said.
Ahead of the 2019 General Elections, Odigie-Oyegun warned against the Party’s complacency despite the fact that the APC remains the only viable party in the country.
“We must not as a party for any reason be complacent, but thank God we have some months to go and I can say with confidence that in this country, there is only one party and that is the APC. But don’t let that lure us into complacence. We must go out there and convince the people that this government is working and that this government is going to take us to the promise land,” he said