After days of indecorous exchanges on the Peoples Democratic Party (PDP) national convention by the PDP and the All Progressives Congress (APC) spokesmen, both parties appear to be sheathing their swords as the National Chairman, Chief John Odigie-Oyegun, acted elderly and sent a congratulatory message to his newly elected opposite number, Prince Uche Secondus. 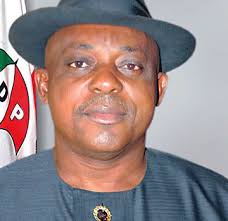 In a message he personally signed, he wrote:
On behalf of our great Party, the All Progressives Congress (APC), I congratulate the new National Chairman of the Peoples Democratic Party (PDP), Prince Uche Secondus on his election at the PDP’s recent National Convention.
I also congratulate other newly-elected PDP National Officials.
It is my hope that the newly-elected PDP National Chairman will use his experience garnered over the years to ensure that the PDP assumes its role as a responsible opposition Party in the country.
Our Party wholeheartedly welcomes opposition because we believe that democracy cannot thrive without a vibrant but responsible opposition that puts the nation first. This will often challenge you to balance partisan interests with overall national considerations.
I assure the PDP National Chairman of my willingness to engage him robustly in an atmosphere devoid of acrimony and rancour. I believe that working together we can both elevate the language and temper of politics in our country, thereby providing the enabling environment for democracy to thrive in our country.