Ijaw youths draw closer to reconciliation as Dickson gets report 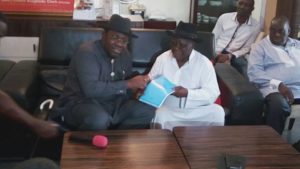 By Ono Akpe, Abuja.
The Eminent Persons  Peace and Reconciliation Committee recently set up by Bayelsa State Governor, Honourable Henry Seriake Dickson ‎to look into the succession crisis rocking the Ijaw Youth Council (IYC)‎ submitted its report today,  Wednesday.
The committee headed by Chief Joshua Fumudoh  submitted its report to Governor Dickson and Chairman Board of Trustees of the Ijaw National Congress (INC) ,Chief E.K Clark at the Asokoro residence of the Ijaw leader in Abuja.
Dickson had in April inaugurated the nine- member committee to reconcile the two factions laying claim to the leadership of the IYC and  to ensure a peaceful enthronement of a single executive that will be acceptable to all stakeholders, leaders and elders of the Ijaw nation.
The governor also charged the committee to identify what led to the parallel executives, the constant squabbles and the challenge of having a peaceful transition after every tenure.
While submittig the report, Fumudoh who was the pioneer president of the INC thanked Dickson for his leadership gualities and finding his committee worthy to undertake this very important assignment.
He said the committee met with all the parties on both sides and held discussions with critical stakeholders all in a bid to get to the root of the matter before arriving at the recommendations which has now formed the basis of the report.
Chief Clark on his part commended the governor for his timely intervention and for taking the Initiative to set up such a high powered committee made up of eminent leaders in Ijaw land to serve as members of the committee.
The elderstatesman said as Chairman of the Board of Trustees of the INC, he along with other leaders and elders will work with the governor to look at the report to ensure that lasting peace and reconciliation‎ are brought to the IYC.
Some of those present at the submission of the report were; Justice Francis Tabai, Ambassador Godknows Igali, Bodrick Bozimo, Chief Francis Doupkola, Chief T.K Okorotie, Dr. Felix Tuodolo and other prominent Ijaw leaders.