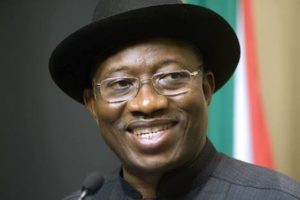 Former President, Goodluck Jonathan: Is he laughing at us?

Rising from a session that lasted close to three hours in Abuja, prominent women leaders of the Peoples Democratic Party (PDP) have called on contending factions led former Governors Ali Modu Sheriff and Ahmed Makarfi to observe a ceasefire in their media war to allow for the peace initiative of former President Goodluck Jonathan to reconcile warring parties to take root.
In latest media exchanges, the Sheriff faction accused Makarfi and his group of sitting tight because of  N50 million monthly payments from PDP Governors.
Makarfi was to fire back that the Sheriff group got $1 million to destabilise the PDP.
But the women in the party, under the aegis of the PDP Women Forum, have frowned at the brickbats and called for peace.
Below is the statement after the close of the meeting in Asokoro, Abuja:
After a well attended meeting of prominent women members of the Peoples Democratic Party (PDP) under the aegis of PDP Women Forum, at Asokoro in Abuja today 14th March 2017, the Forum reiterated that the  gathering of women of the PDP remains to build its base within the party and pursue the politics of inclusion and advancement of the gender quota in the party.
The forum met with the sole aim of assessing and addressing the crisis in the PDP and seeking a peaceful resolution.
It observed that there is a national clarion call for the PDP to put its act together and play its role as opposition to the ruling All Progressives Congress, (APC).
It noted the Sunday, 12th March, 2017 Editorial of Thisday which said that “it is in the nation’s interest to have a viable opposition platform and the PDP, given its history and strong organizational hierarchy, is in the best stead to play this role.”
Consequently, the meeting after much deliberation, decided to call on all the combatants to observe a period of verbal ceasefire and allow for  genuine reconciliation efforts to be explored.
It noted the unhealthy exchanges in the press between the contending interests and appealed to all sides to subject themselves to the process of political reconciliation, initiated by former President Goodluck Jonathan.
The forum declared that the ceasefire should last for at least two months and the Former President should look within and outside the party for enablers and influencers to assist in the reconciliation effort.
It suggested the constitution of a Committee of the Wise by H.E. Goodluck Ebele Jonathan which will be populated by persons of goodwill towards the party with representation of not less than 40% being women and the youth.
The Women Forum resolved to set up its own committee to engage in lobbying various leaders and brokers of the conflict to seek meaningful peace and political resolution of the crisis.
It expressed its belief that the party was larger than the individuals and ultimately the interest of the party must supersede that of groups, individuals and factions.
It committed itself to relinquish to the future generations of the party, a viable party, conscious of its duty to all its members particularly, women, male and female youth and persons with disability.
It noted that it had the ability through persuasion and massive mobilization to make its point about peace and agreed to work with its large political base to ensure the survival of the PDP as a viable party.
It reiterated the role of women as peace builders and assured that it will do all in its power to arrest the current erosion of  confidence in the party and its actions.
On the national scene, it called on the Federal Government to react to the recent UN report on famine and potential widespread starvation in the Lake Chad region and parts of North East Nigeria.
It observed that the post Boko Haram challenges have worsened the situation and expressed worry about the hopelessness of many, particularly women and children facing malnutrition and other threats as IDPs.
It joined other Nigerians to welcome Mr. President Muhammadu Buhari from his vacation and called on all women of the party to fervently pray for his full recovery.
It commended Nigerians for holding the peace during the absence of Mr President and for believing in the workability of the democratic process.
The forum also noted with some dissatisfaction the role allegedly played by INEC and called on it to show more transparency and accountability in elections ensuring that civil standards where security forces are not used to intimidate the electorate and opposition prevail.
It congratulated the new Chief Justice of Nigeria on his appointment and urged him to use his good office to bring the judiciary back to its tradition of non-partisanship.  As a party in opposition, it believes that the judiciary has a duty to the country to restore confidence in the rule of law and hope in the future of democracy.
The PDP Women’s Forum commits to work within the ambit of the law to restore dignity to our country and to participate actively in getting the party back as a viable alternative to the ruling party in 2019.
Finally, it recognizes the role that many in the party have played in seeking solutions and thanks them for their selfless service. It commends the women of the party and calls on them to show their unflinching support and commitment to the development of the PDP and democracy in Nigeria.
Among those who were at the Forum’s meeting were: Senator Abiodun Olujimi; Chief Remi Adiukwu; Former Minister of Aviation, Mrs. Fidelia Njeze, Chinwe Nnorom, Dr. Aisha Aliyu, Amb. nlNkoyo Toyo, Zonal Woman PDP leaders for North West and North Central. Women leaders from about 20 states,  youths, and other stakeholders.

Where Nigerian lawmakers should visit and what to say in South Africa, by residents