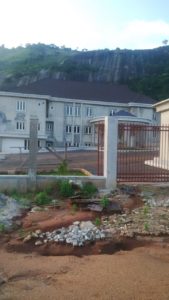 An almost completed structure on the disputed land

Already, the FCDA appears to be handicapped and tongue-tied since the face-off between the military and Kakatar broke out last week. The beleagued allottees being denied access are expecting the minister or his representatives to speak on the status of their plots but they have not been forthcoming apparently because they are as puzzled as the company by the action of the military.

The army’s action has created tension among plot owners, who fear that they may also be denied access to their plots under construction. The fear is heightened by the clear warning by the military that nobody would be allowed access to the land in question and soldiers have also effectively barred anyone from accessing their plots since the day the order was made on September 3.

The seizure of the land by the army also raises fear that the construction of the official residences of the Senate President, his deputy, the Speaker of the House of Representatives and other principal officers of the National Assembly, which was at various stages of completion, has also come to an abrupt end.

In fact, the residences of the senior government officials are at the level of being completed while the provision of infrastructure by the company has also reached an advanced stage. But many privately-owned property are already completed and ready for occupation waiting for Kakatar to complete its contract and handover. The major bridge linking all the facilities and segments in the district, has been completed along with many roads, water, sewage ducts etc.

In a bid to ensure that everything goes as planned in the district, Senator Dino Maleye, who is the FCT Senate Committee Chairman and his House Committee counterpart regularly carry out oversight duties on the site and particularly on the official residences of the National Assembly principal officers under construction there. Both men have not raised any concern with the ongoing work at the site seized by the army and may spit fire over the puzzling development once they resume from vacation.

But faced with the sudden threat and the disruption of its operations, Kakatar has expressed surprise over the action of the Nigerian Army, saying that it had not breached any known law to warrant the action of the soldiers.

The Spokesman for the company, Mr. Austin Ekeinde, said in a statement released in Abuja that the action of the Nigerian Army is causing its company huge losses and untold hardship for hundreds of families whose workers in Kakatar are now being forced to stay at home.

“It is instructive to note that at no time did the company suggest or claim that the land upon which it was using as a site  to coordinate the project belongs to Kakatar. Never!

“All that we have been doing is to speedily complete the contract in accordance with the terms and pull out our equipment so that the plot owners can move into their property and live happily.

“We have been very very good neighbor with the army and certainly our presence has been beneficial to them.  No notice of any security breach or infraction has ever been sent to us by the Army.

“No enquiry as to our presence or intention to recover any land was ever sent to us before locking us out.

“We believe there is a failure of intelligence here. A fact check would easily have revealed that the land in question belongs to over 400 allottees and that it is the place to host the  official residences of the Senate and deputy senate President and that allottees have already developed their plots to advanced stage,” Ekeinde said.

Apparently angered by the development, fiery human rights lawyer, Femi Falana, has slammed the Nigerian army for its brutal action, describing the forceful takeover of the company’s premises as dictatorial and unwarranted in a decent democratic setting.