Wreath-laying ceremony and statements from Presidency, Atiku, and APC 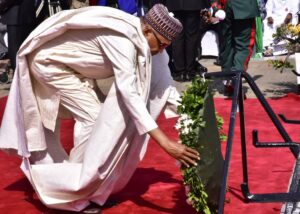 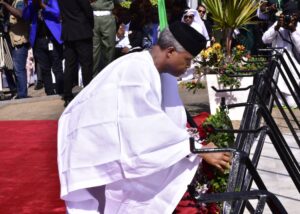 STATEMENT ON THE 50TH ANNIVERSARY OF THE CIVIL WAR’S CESSATION

As the nation commentates 50 years of the end of the nation’s tragic civil war today, we remember the victims of the conflict and honour those on both sides that lost their lives. Their tragedy shall be neither forgotten nor repeated.

The war serves as a potent warning on the dangers of aggressive regionalism, ethnic baiting and political corruption. In it, we must forge common memory that can serve as a bridge to a future free from the ravages of sectarianism.

We remember the past to draw its lessons; on how we move forward together and live in peace. Unfortunately, there are some who fail to recognise them and instead repeat its mistakes, preaching inflammatory rhetoric meant only to divide. We call on all leaders and parties to moderate their language.

There were no victors in this war. Yet in rejecting division and embracing unity, we ensure those lives lost were not in vain.

Abuja, 15 January 2020: Former Vice President of Nigeria, Atiku Abubakar pays tribute to members of Nigeria’s armed forces for what he calls their invaluable, incalculable and immeasurable sacrifices in the defence of the country’s territorial integrity.

In his goodwill message to mark the Armed Forces Remembrance Day on January 15, Atiku reminds of the contributions of these patriotic and amazing military personnel who have put their own lives on the line for the sake of others.

“While we sleep in our homes, these amazing patriots are in the field fighting to protect us, leaving the comfort of their own families for our sake.

“People who expose themselves to these daily risks to their own lives in order to protect others deserve our highest esteem, and I am sure no reward is enough for their patriotic services”.

The scourges of terrorism and armed banditry have put a greater burden of responsibility on the shoulders of these men and women in military uniform.

Despite these additional challenges of internal security, members of our armed forces are still carrying out their duties with vigour, zeal and commitment.

Nigerians should continue to pray for these great patriots who have sacrificed their own comforts for our sake because we cannot adequately pay them back for their professional and patriotic services to the country.

As Nigeria marks the 2020 Armed Forces Remembrance Day, the All Progressives Congress (APC) commends the military for keeping the country safe and preserving it for future generation.

Our troops are engaged on the frontlines of the war against Islamic State of West Africa Province (ISWAP)/Boko Haram terrorists, murderous armed herdsmen, kidnappers and other criminal elements. We all have a conscious and collective duty to ensure that the sacrifice and labour of our troops – retired, serving and those who have paid the supreme price in defence of our country – will never be in vain.

While there remains a lot more to be done for our troops, the President Muhammadu Buhari has shown great determination and commitment to improve the lives of our military personnel through improved military budget, better welfare for armed forces personnel and the families left behind by fallen soldiers and procurement of modern military equipment for our troops.

We urge Nigerians to continually pray for and support our brave troops as they continue to defend our territorial integrity so that we all can sleep peacefully at night. 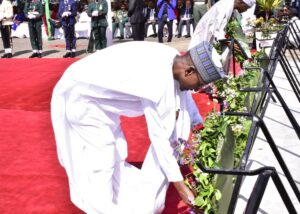