It was a day of dramas and videos in Abuja as angry natives of Abuja, protesting the takeover of their land forced Vice President Yemi Osinbajo to disembark at Goza village on the Umaru Musa Yar’Adua Way (Airport Road) to address them.

An abridged version of the video showing the Vice President returning to his car, was posted on Twitter by Osinbajo’s spokesman, Mr. Laolu Akande. 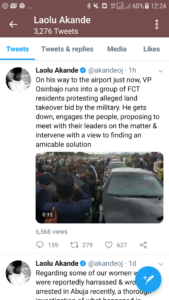 Another video showed Senator Ademola Adeleke, being brought to Court in Abuja to face charges regarding forged secondary school documents.

He waved the victory symbol with his fingers as he marched into court, after a mild

drama over his cap in the bus that brought him to Court.

Adeleke was detained on Monday by the Police when he honoured an invitation, leading to a protest by the opposition Peoples Democratic Party (PDP) that he was being persecuted over the Osun Governorship election which an Election Tribunal declared he won.

Recall that before the disagreement over land that led to the death of a native on the Abuja-Kaduna Highway near Zuba weeks ago nearly 40 kilometres from where the Goza protesters accosted Osinbajo, the residents of that town had protested vehemently burning tyres on major access route from the Nnamdi Azikiwe International Airport, Abuja, over the forceful restoration of the major Friday market in Goza back into the village from the overflow to the edge of the airport road.

Osinbajo spoke with protesters and agreed to meet with their leaders, according to Akande in his tweet.

.eanwhile, the News Agency of Nigeria (NAN) is reporting that a group of indigenous Gbagi people of the Federal Capital Territory (FCT),Abuja, on Tuesday disrupted traffic on the Umar Musa Yar’dua Way to protest against the Federal Government.

The protesters blocked the highway for about an hour causing gridlock.

Some air travellers who were rushing to catch their flights at the airport were frustrated by the development.

Although, the protesters had opened the road before NAN arrived the spot but one of the protesters, Fred Ekeng, said that the protest was to drive home their demand for recognition as indigenous people.

Ekeng said the protest was to tell government that the people should be given their proper place in the territory.

According to him, the people are saying no to ceaseless taking over of their land.

“We came here to express our displeasure with the way the government and the military are ceasing our lands without compensation and treating us like second class citizens in our own land.

“We are saying that henceforth, the position of the Minister of FCT should be held by an indigene instead of an outsider.

“We also want the government to treat us with respect because they keep taking over our lands and pushing us into the interiors without proper compensation, “ he said.

Also, Senator Adeleke was early Tuesday granted bail by an Mpape Magistrate Court, Abuja, while the substantive suit was adjourned to June 24 this year.