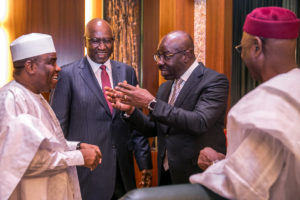 An update of the ongoing forensic audit of revenue accrued from revenue generating agencies and meant for the Federation Account was given today at the National Economic Council, NEC meeting presided over by Vice President Yemi Osinbajo, SAN.

The Chairman of the Ad Hoc Committee of NEC on the audit, Governor Ibrahim Dankwambo, of Gombe State said the forensic audit is ongoing and assured Council that the full detail of the report would be ready in January, 2018.

He mentioned the Nigerian Customs Service and the National Communication Commission as the two agencies that are now being audited in a review that has included other agencies including NNPC.

The report is expected to detail the extent of revenue meant for the Federation but never made it to the Consolidated Account under the past administration.

This was one of the highlights at the monthly NEC meeting earlier today at the Council Chambers of the Presidential Villa, Abuja.

Also the details of inflows and outflows of special accounts of the Federal Government would be provided beginning from 2015 to date, according to the Minister of Finance, Mrs Kemi Adeosun.

The Minister also disclosed that several States have not been complying with conditions for the Budget Support facility as agreed  under the Fiscal Responsibility Plan.

She added that particular states are yet to publish the mode of their financial disbursement, while some others have also not completed the Biometric Data of their staff list as agreed by the Council.

The Fiscal Responsibility Plan endorsed last year by NEC details the conditions State governments are expected to meet to qualify for FG’s Budget Support Facility which ranges from N800m to over N1B per State, per month.

UPDATE ON FORENSIC AUDIT OF REVENUE ACCRUED FROM REVENUE GENERATING AGENCIES (RGAS) INTO THE FEDERATION ACCOUNT, EXCESS CRUDE ACCOUNT AND CONSOLIDATED REVENUE FUND BY THE CHAIRMAN OF THE COMMITTEE, GOVERNOR OF GOMBE STATE,

His Excellency the Governor of Gombe State, and Chairman of the Forensic Audit Committee, Dr. Ibrahim Dankwambo, informed Council that the audit firm Messrs. KPMG, is still conducting the forensic audit of some establishment and that a full report will be ready by January 2018.

UPDATE ON THE BALANCE IN THE NATURAL RESOURCES DEVELOPMENT FUND

Council was informed by the Accountant-General of the Federation that the balance in the Natural Resources Development Fund Account as at 13th December, 2017 stands at N106.984 billion.

The Accountant-General of the Federation also informed Council that the balance in the ECA as at 13th December, 2017 stands at $2.317 billion.

UPDATE ON THE CURRENT BALANCE OF THE STABILIZATION FUND ACCOUNT

The Accountant-General of the Federation informed Council that the balance in the Stabilization Fund Account as at 13th December, 2017 stands at N7.78 billion.

Council was informed that payment for the months of June, July and August to States has been effected, and that preparations are underway to do same for the month of September, 2017.

Council would be furnished with details of inflow and outflow beginning from 2015 to date regarding some of these special accounts: stabilization fund Account and Natural resources development fund

The Honourable Minister of Water Resources, Engineer Suleiman Adamu, presented a memo to Council, asking for urgent steps and action in the water sector if the country is to overcome the challenges of water supply, sanitation and water governance issues, as well as achieve the 2030 targets of the Sustainable Development Goals (SDGs) on water supply and sanitation.

He informed Council that Nigeria is lagging behind in terms of water supply, with access to pipe-borne water dropping from 32% in 1990 to less than 7% in 2017, with a corresponding increase of 25% in open defecation and the

He told Council that an estimated investment of N1.9 trillion is needed in the next 15 years to meet the SDGs by 2030.

He outlined a three-phase Action Plan to revitalize the water, sanitation and hygiene sector to include the following:

These plans, he said, will involve the urgent establishment of an institutional and funding framework for Water Supply, Sanitation and Hygiene (WASH) Services, and the engagement of Urban and Rural (WASH) sectors on an accelerated development path towards 2030.

The plan also calls for tripling the current investment in water supply, establishment of a WASH fund, fast-tracking the development of the National policy on Sanitation and the presidential launch of a National Sanitation Campaign to eliminate open defecation.

Furthermore, the plan is seeking the massive rehabilitation of existing infrastructure in the sector, and sectoral reform towards cost recovery and promotion of private sector participation in the sector, all aimed at taking care of the estimated 182 million population.

The National Water Reserves Bill now before the National Assembly provides for the establishment of Catchment Management Committees, with representatives of States within each hydrological area as permanent members.

Council was also informed that the River Basin Development Authorities across the country are undergoing structural reforms towards partial to full commercialization.

Council thanked the Minister of Water Resources and urged collaboration between stakeholders in the approach to National Water Supply.

ANY OTHER BUSINESS (AOB)

The Chairman Governor’s Forum, Alhaji Abdullazeez Yari, informed Council that Governors have offered to contribute over $1 billion to support Military Operations in the North East. Governors said money should be taken from the ECA.

The SGF informed Council that there will be a retreat in the coming days, 18th – 19thDecember, between the SGF and all Secretaries to the State Governments for better collaboration on issues of security and governance in all tiers of government.

Honourable Minister of State, Petroleum Resources, Dr. Ibe Kachikwu, told Council that fuel queues will disappear nationwide in the next 48 hours.  All logistic arrangements to this effect have been concluded.  He assured that there is enough fuel in the strategic reserve to last till the end of January.

In his closing remarks at the meeting, His Excellency, the Vice President, wished the Governors and the people of their States Merry Christmas holiday as the meeting is the last in the year.

Teachers now to be in govt service for 40 years, work until 65 years of age

Teachers now to be in govt service for 40 years, work until 65 years of age