Six more added to grim statistics of deaths in Borno 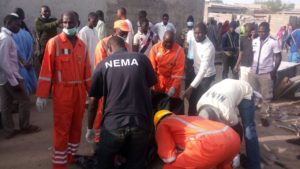 Life in the Borno axis of the country continues to get short and brutish as the Nigerian Emergency Management Agency has confirmed that six persons, including four female teenage  suicide bombers were among those that died after the girls detonated the bombs they were wearing.

195 students of the Government Secondary, Chibok, are still nowhere to be found, among others, abducted by the dreaded Boko Haram insurgents, who still continue to kill and maim despite government claims of totally degrading them.

Groups, like the Bring Back Our Girls (BBOG) still continue to shout themselves hoarse over the plight of the abductees, even as it appears efforts for a negotiated return of the girls has collapsed

Governor Kashim Shettima of Borno State, weeks ago, reeled out troubling statistics on the effect of insurgency in his domain.

Delivering a paper “Managing the Boko Haram Crisis in Borno State, Experiences and Lessons for a Multiparty, Multiethnic and Multireligious Nigeria”, he disclosed that almost 100,000 persons had lost their lives from figures he got from community leaders over the years.

He added: “Two million, one hundred and fourteen thousand (2,114,000) persons have become internally displaced as at December of 2016, with five hundred and thirty seven thousand, eight hundred and fifteen (537,815) in separate camps; 158,201 are at official camps that consists of six centres with two transit camps at Muna and Customs House, both in Maiduguri.

“There are 379,614 IDPs at 15 satellite camps comprising Ngala, Monguno, Bama, Banki, Pulka, Gwoza, Sabon Gari and other locations in the state. 73,404 persons were forced to become refugees in neighbouring countries with Niger having 11,402 and Cameroon having 62,002.

“We have an official record of 52,311 orphans who are separated and unaccompanied. We have 54,911 widows who have lost their husbands to the insurgency and about 9,012 have returned back to various communities of Ngala, Monguno, Damboa, Gwoza and Dikwa.”

In his statement Wednesday, the NEMA spokesman, Mallam Sani Datti, said that  two other  men died when the girls “detonated explosives at Usmanti along muna Garage road at about 1. 15 a.m.”

He added: “16 people who got injured were administered with first aid by rescue workers before being transported to the state specialist hospital and university teaching hospital in Maiduguri Borno state.”