In a response to comments by the Presidency that the United Kingdom, the United States, and the European Union to face their own internal issues and stop interfering in Nigeria’s internal affairs, former Kaduna Senator, Shehu Sani has said Nigeria cannot continue collecting aids from these countries and entity and ask them not to mind Nigeria’s business. 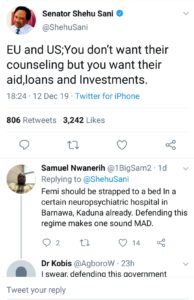 The UK, US, EU have expressd reservations at the invasion of a court by agents of the State Security Service (SSS) to arrest newspaper publisher, Omoyele Sowore; deteriorating human rights issues; and disobedience of court orders.

Fears are already been raised that the cacophony of noise by these countries and members of influential US Senate Foreign Relations Committee forebodes bad news for foreign relations.

An online newspaper, Premium Times reported that on Tuesday, Chris Coons, a U.S. senator spoke out about Mr Sowore’s re-arrest. Mr Coons is the Vice-Chair of the Senate Ethics Committee and a member of the Senate Foreign Relations.

He said in a tweet that he is “concerned that this case is representative of closing of political and media space in Nigeria. Civil society leaders and human rights defenders should be celebrated, not persecuted, in Nigeria and around the world.”

“I’m deeply concerned by the harassment and repeated detainment of Nigerian activist, journalist, and former presidential candidate Omoyele Sowore. I urge Nigerian security services to respect due process and the rule of law, release Sowore per his bail terms, and launch an investigation into his re-arrest.”

“We are not answerable to either the U.S. or the UK or the EU; we are Nigeria, a sovereign country,” Adesina told Channels TV.

“Those countries and entities have issues of their own; let them deal with their issues. Let Nigeria also deal with her internal issues. We are not answerable to them.”

On Nigerians commenting on Sowore’s ordeal, he said, “The President knows the truth about what is happening in the country, so there is no need for any worry or agitation.

“But the question is who are these Nigerians and how many are they among about 200 million people?

“Who are they? A tiny but vocal minority who will always complain. If they mistakenly get to heaven they will complain about conditions in heaven.”

On Professor Soyinka’s comments, Adesina adds, “If there are genuine issues, they would always be looked into.

“We respect Professor Soyinka. You don’t have too many of them in the country nor even on the continent.

“Professor Soyinka is an avatar, he is well respected but do you know one thing, Professor Soyinka’s opinion will still be his opinion. It will be considered and if there are things to act on, they will be acted on”.

Who brutally murdered Laetitia, an Aso Villa director, in her home?

Who brutally murdered Laetitia, an Aso Villa director, in her home?