The Senate has noted that the letter by President Muhammadu Buhari to the Senate in which he claimed that National Assembly’s approval for refunds to Delta and Taraba State Governments through the issuance of Promissory Notes, for projects executed on behalf of the Federal Government was different from what the Federal Executive Council approved and the reports in the media over the issue were wrong and must have resulted from misinformation to the President by his aides.

The Senate in a statement Wednesday stated that the Senate approved the exact figures for Taraba and Delta States that was submitted to it by the Executive through the Ministry of Finance as stated on page 402 of a document titled “Federal Ministry of Finance Submission of Federal Government of Nigeria Outstanding Liabilities to National Assembly, May, 2018”. 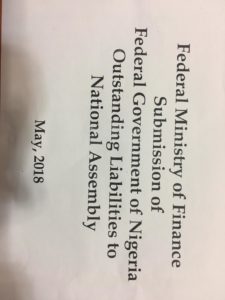 “Therefore, the National Assembly approved the figures submitted to it by the Ministry of Finance as approved by the Federal Executive Council (FEC) for projects executed on behalf of the Federal Government. At no time did the executive forwarded the figure of N78, 601, 631, 430, 16 to us and we do not know where the President got that figure from.

“We have decided to make this clarification in order to set the records straight and disabuse the minds of the general public.  We believe the President must have been misinformed and misadvised by his aides while writing the letter he sent on this issue to the National Assembly”, the Senate stated.