by Admin
in Sports
0

… “Aguero scores goal of the tourney

Bayelsa’s Restoration Starlets opened their campaign in the Africa Youth Cup in Cape Verde on Sunday evening with an emphatic 4-1 trouncing of the Cape Verde youth team, Misto Barlavento, in their first game.

The Nigerian team will take on the Ivorian youth side by 5pm Nigerian time Monday 21st April.

The Teibowei Diepreye-tutored side silenced the home fans just five minutes into the game when gangling Alison William scored the first goal from the spot after being brought down in the 18 yard box by the Cape Verdian number 5. 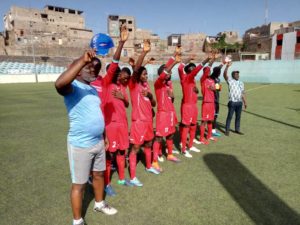 Barely two minutes later William struck again with a glancing header from a corner kick floated in by Tarabina Beweriebo, the team’s captian, to put the BAYELSA lads two goals ahead .

Hard fighting Barlavento urged on by the voiciferous home crowd managed to pull one back after a crosd into the Stralet’s 18 yard was not swiftly dealt with.

This goal emblodened the home side who pilled more pressure but the Restoration boys held on firmly till the close of the first half.

At the resumption of play Restoration Starlets took the game to the hosts applying presuure on the defence line of the Cape Verdian team and in no time gangling number 9 , Williams outsmarted his marker to slot in the 3rd goal of the match.

The Misto Barlavento boys were undaunted and tried to outplay the BAYELSA side but the Nigerian lads held their ground until the the middle of the second half when Emomotimi Precious also known as Aguero dribbled his marker on the run to riffle home the fourth goal in a move that can be adjuged the best goal of the tournament so far.

Efforts by the Cape Verdian boys to close up scores failed as the Restoration boys held on gallantly until the final blasts of the whistle to record a comfortable 4-1 victory in their first match and the second match of the tournament.