By Yusuph Olaniyonu, Special Adviser to Senate President on Media and Publicity
Our attention has been drawn to the blatant lies contained in a press release issued by the Nigeria Police this afternoon over the protest match staged by the Peoples Democratic Party (PDP) in Abuja against the infamous roles that the Independent National Electoral Commission (INEC) and the Nigeria Police have been playing in recent elections across the country, particularly in the Ekiti and Osun gubernatorial elections.
The Police in their statement made various forms of spurious, unfounded and false claims about the protest in which they singled out three senators, Senate President Abubakar Bukola Saraki, Senators Dino Melaye and Ben Murray-Bruce, of the many leaders of the PDP, including three Governors, a former Governor, presidential aspirants and members of the national working committee, and accused them of involvement “in the disturbance of public safety, unlawful blockade of Shehu Shagari Way…., causing innocent people to scamper for safety and violent attack on Policemen posted to ensure security of Force Headquarters, pushing and hitting the policemen to forcefully enter the Force Headquaters, pushing and hitting the policemen to forcefully enter the Force Headquarters to cause damage to Police Equipment and properties”. 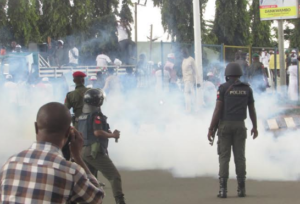 After carefully reading the Police statement, one cannot but describe the claims made in it as laughable, crude and another low point in the posture of the police against the opposition in the country.
In exercise of their constitutional right of assembly, expression and movement, leaders of the PDP decided to stage a peaceful procession from the party’s campaign office on Ibrahim Babangida Way to INEC and Police Headquarters. The procession consisted of the Senate President, the party’s National Chairman, Prince Uche Secondus, presidential aspirants, members of the National Assembly, Governors of Ekiti and Sokoto States. Later, the Governors of Taraba and Gombe States joined the procession.
The purpose was to express the opposition of the PDP to the manner in which the electoral body and the security agencies had been colluding with the ruling All Progressives Congress (APC) to manipulate election results and subvert the will of the people, as evidenced by the conduct of the gubernatorial elections in Ekiti and Osun State. We wanted to send a clear signal that such official subversion of the will of the people in favour of the APC should not be repeated in the 2019 elections.
At the INEC secretariat, the procession spent over 40 minutes where the various leaders addressed the crowd in the presence of two National Commissioners of INEC, including the one in charge of legal matters, Mrs. May Agbamuche-Mbu. The two INEC commissioners equally responded to the complaints raised by the PDP leaders. It was a civilised, frank and enlightened exchange, devoid of any rancour.
The procession then headed towards the Police Headquarters while being hailed on the streets by ordinary Nigerians who came out to cheer the leaders standing in an open van. From the Eagles Square end, the procession was on the other side of the road going to Police Headquarters. The procession did not even get to the point where it will turn to the side where the Police Force Headquarters is located when the police rained tear gas on the people. They deliberately targetted the open vans in which the Senate President and other VIPs were standing.
The procession quickly diverted to the Area 11 Junction leading to FCDA. The diversion was done to avoid a repeat of the 2003 event in which a similar tear-gassing event led to the death of a former Senate President, Senator Chuba Okadigbo.
Let it be known that the hostile, brutal, needlesss, tactless and uncivil response of the Police under the present leadership of Mr. Ibrahim Kpotum Idris, to the peaceful, lawful and justified procession was in contrast to how the same police responded to a similar protest by the opposition in 2014.
In 2014, the protesters then led by the Major General Muhammadu Buhari (rtd.), the candidate of the opposition party, were not attacked. They were tolerated and their grievances listened to by the police leadership. In 2014, it was the same Nigeria Police as we have today. The difference is the temperament and democratic credentials of the then administration, in general, and that of the Police leadership, in particular.
The fabrications by the Police as contained in their press statement only show the new police leadership as mere jesters trying to hone their skills in comic script-writing. Every move of the PDP procession today was recorded by the media – Television, print, radio and online -, citizens, members of the civil society and the international community. These independent observers know that nothing is far from the truth than the claims made by the Police in their statement.
It should be noted that the Police under Idris are simply setting the stage for another onslaught on members of the Nigerian Senate and that is why they singled out the Senate President and two other Senators as the people being invited and accused of all these false charges.
It is clear that the Idris-led Police are intent on turning Nigeria into a police state and destroying members of the opposition at all cost and that is why they specialize in framing up leaders of the opposition and other outspoken legislators on false charges.
This fresh attempt will fail. The invited Senators and their party will exercise their right at all times and in all cases. We know that Nigeria has not turned to a Banana Republic and we will not allow the Police under the present leadership to turn it to one, no matter the expertise for evil being displayed by its top personnel.