There is confusion in Abuja whether some of the thugs that accompanied Senator Ovie Omo-Agege into the Senate Chambers to unleash violence and snatch away the recovered mace have been arrested.

While Police sources said in the National Assembly Wednesday that four had been picked up, no formal statement was issued Thursday, but viral photos on the internet showed some of the thugs, caught on Senate CCTV camera,  in a police van surrounded by gun-wielding policemen.

A call to the number of Police spokesman, Anjuguri Manzah, was not picked, and it was difficult to verify the photos. 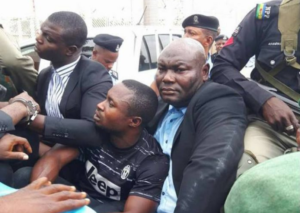