Photos emerge of attacks on school, church in Biu

Photos of the attack by Boko Haram in Biu town where the terrorists set ablaze a school and church and stayed back to watch them burn down have emerged.

The insurgents attacked Mandaragirau village last Sunday night and abducted a man as they retreated.

It was one in a series of attacks around Biu Local Government Area since Christmas eve. Other villages attacked are Yamarkumi, Mainahari, Miringa, Buratai. Buratai is where Nigeria Army Chief hails from. 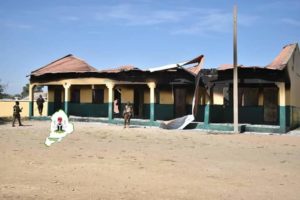 The night attack, the villagers said, took place after they retired for the night, but were startled awake by gunshots that sent them fleeing into the surrounding bushes. Their case was made worse by the chilly harmattan. 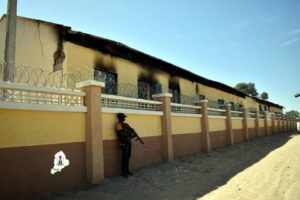 One resident was quoted as saying: “They have burnt down a church, a school and some shops in the town,” said the source who asked not to be named. “They have also taken away one man whom they caught while trying to escape.” The source said the fleeing villagers spent the night out in the cold till this morning. 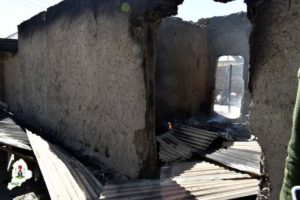 “They have all returned to the town this morning.”

A former chairman of Biu Local Government Area, who also hail from Mandaragirau, Yusuf Adamu, described the attack as a sad development.

It is not exactly clear why the insurgents have targeted Biu, but it is believed they are making a point, beyond targeting symbols of western education and Christianity which they have sworn to fight.

Tens of thousands of persons have died since the insurgency’s little beginnings 10 years ago, while estimates put those affected by the attacks at millions.