(Opinion) Leah Sharibu: I don’t want to think about it

I woke up this morning with some strange thoughts. I wish I didn’t have to but my mind won’t let go. Why will millions of people be lashed, tortured, maimed, raped, dehumanized and unaccounted for? My wondering mind is asking for the current location of those girls adducted in North East Nigeria since politics has wiped them off national discuss.Those Chibok girls are no longer campaign issues, even though their territory is in the firm grip of seditious men. But I don’t want to think about that.

Are they not of marriageable age now, going by Northern Nigeria’s standard! Yet daily they’re living in ‘hell’ and watchful eyes of sex starved, emotionally depraved men with no conscience. I wonder how many children some would have given birth to in five years of serving in the house of horror co-habiting with men who prey on their most fertile period of adolescence and innocence. That’s why I don’t want to think about that. 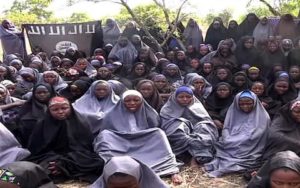 Then my mind went to Leah Sharibu. The defiant Christian teenage girl, abducted from school with 105 others by some deranged fellows. While others changed their faith to gain freedom, Leah refused the offer to return home a Muslim. She retained her Christian faith conviction and remained incarcerated by the villains who kidnapped her. I wonder what went on in her mind the day she chose captivity and spurned a chance to renounce Christ. What’s her reason for choosing affliction in God’s name than a conditional freedom? But I don’t what to think about that.

What might have happened to her well talked about Christian faith and her fate going forward? Is she allowed to own a bible or let alone read one? When last did she have a morning devotion? Has she a prayer partner in captivity? Does she have some critical questions on faith, virtue and Christian discipline bogging her mind? Or have they bought her a Quran hoping someday she will have a change of heart and follow their perdition? No, I don’t want to think about that.

Does Leah sleep well each night, especially last night? When she woke up this morning, did she fetch water for one of the kingpins or make breakfast for her hellish slave masters? Would she have had breakfast herself, assuming she had dinner last night? Is she offered food or she begs and pays with her body to feed? Is she subjected to punishment for refusing to play along? Has she remained her stubborn self in that forbidden forest, like Daniel who fed on veggies and beans in place of king’s delicacies. I just don’t want to think about that.

Does she get sanitary pads as and when needed or the mere mention of such a need infuriates her soulless commander? How does she cope as a physically attractive, well-formed young lady, living with men given to marrying preschoolers? Will they dissolve her resolve to stay holy! Has she been raped or drugged to sleep with them?Has she been reduced to a mere sex slave and her mind numbed. How is she holding out in that dungeon when many of our city girls give free sex to young and old men as they sleep around at the slightest urge in our campuses. I just don’t want to think about that.

Do they get her a fitting new dress or make her wear the religious gown of her tormenters? Is she allowed to dress modestly even though her mates and older girls in cities are donning strange hairdo, tattered jeans, cleavage-revealing tops, micro mini or bum shorts! Will they let her simple village Christian girl demeanor and sanity hold? I wonder what the heinous males and despicable females in that inglorious enclave think of Big Brother Naija; the mockery they are poking at her for insisting on her home grown Christian values? I don’t want to think about it

▪ Olonade is the head of El-Rehoboth Global Leadership Foundation based in Jos.

Video: Many more join prayer cry, march for Leah as Panam releases track in honour of her

[Leah Sharibu]: We celebrate them, and desecrate Him

[Leah Sharibu]: We celebrate them, and desecrate Him

Osinbajo says Nigeria has what it takes to lead in healthcare

Osinbajo says Nigeria has what it takes to lead in healthcare