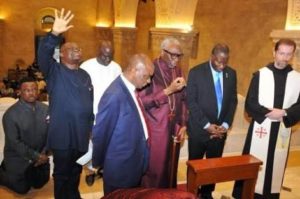 The Role of the Church in the Fight Against Corruption in Nigeria”
By Chief Olusegun Obasanjo
At the Convention of Victory Life Bible Church International (VLBC)
Victory City, Opp. OGTV, Abeokuta, Sat. April 8, 2017.

Christian cowardice and bridging the gap 1

Christian cowardice and bridging the gap 2

Christian cowardice and bridging the gap 2

Trouble in the House of PDP, seven national officers resign

Trouble in the House of PDP, seven national officers resign