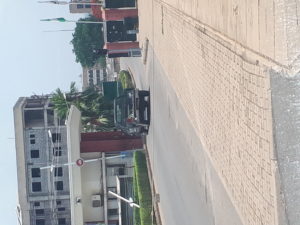 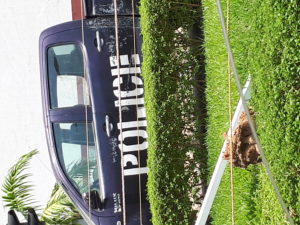 A mild drama is playing out at the National Hospital Abuja where a police patrol van has been used to block the exit gate of the country’s premier hospital as a result of a disagreement with the hospital management over the corpse of an unnamed young man.

It was gathered that the young man was stabbed to death in a fight in Jabi District. The Police team brought the corpse to the National Hospital morgue, but the attendants declined to accept it.

“In anger, the policemen offloaded the corpse and left the morgue, but the security personnel locked up the exit gate of the hospital,  preventing the police van from leaving. They (policemen) abandoned their patrol van at the gate and left,” an eyewitness said.

It was not clear why the morgue attendants refused to accept the corpse, but many were surprised that the police would use a vehicle to block the gate of the country’s premier hospital and walk away.

As at 1:15 p.m., over three hours after, the van was still blocking the gate, while visitors and others were being forced to clumsily use the entry gate as the exit gate.