Two men have walked the 60 kilometres distance between Doka town and Kajuru to register their protests over goings-on in the area, and to solidarise with the Adara Traditional Council.

Kajuru has been the hotbed of ethno-religious conflicts between the native Adara people and Hausa settlers. Scores of lives have been lost in the local government area, and there is a frzgile security situation the government has been working to tame.

Samuel M. Jatau from Kuturah and Emmanuel Nagaiza (Adara Youth Chairman, Doka Branch) both walked about 60 kilometres from Doka to the late Agom Adara’s house at Mararaban Rido, as their way of protesting the plight of the Adara and the balkanization of the Chiefdom, and also to show solidarity to the Adara Traditional Council. Agom Adara, the traditional head of the ethnic group died in the hands of alleged kidnappers. 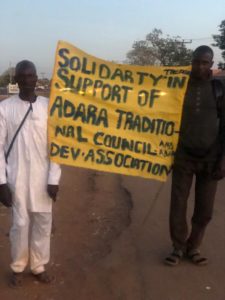 Meanwhile, the rapprochement that was appearing in the different camps of the Adara ethnic nationality following a meeting called by the Chairman of Kajuru Local Government Area appears to be crumbling.

A dissenting position on agreed positions has been taken by Adara Development Association (ADA), represented at that meeting by its President, Mr. Dio Maisamari. Maisamari had shown his dissent at the meeting, but was shouted down.

Recall that a communique issued at the end of Kajuru LGA Adara Stakeholders meeting held at Government Day Secondary School, Maraban Kajuru on Wednesday 18th December 2019, resolved that “participants in totality supported the efforts of KDSG in rebuilding Kasuwan Magani ultra modern market and called for faster reconstruction efforts so as to meet up with the stipulated completion period of the project.”

▪That the security issues be discussed discretely at a later date.

▪ it resolved that ADA and LG IDPs committees should be fused together to work in harmony.

But the ADA National Executive Committee of Adara Development Association (ADA) met on Friday 20th December, 2019, and reviewed the resolutions of the local council chairman’s meeting last Wednesday and took a stand fundamentally different from that meeting.

While applauding the Chairman for convening the “meeting of that sort for the very first time” and hoping that it will continue, the ADA NEC called for future meetings to be formally constituted in consultation “with all relevant blocks of stakeholders before it can assume the name given to it.”

The NEC, in a letter to the Kajuru council chairman added: “To convene such an important meeting for the first time on those few issues and discuss them in the manner that it was done betrays political and personal interests. A properly constituted Adara stakeholders meeting will certainly address these and other equally crucial issues in a much more sober manner.

“Even after it is properly constituted, the resolutions of such a meeting on matters that (are) of concern to and are already being handled by the Adara nation as a whole are purely advisory. The resolutions are subject to further consideration by Adara Stakeholders Forum and ADA. This observation was made during the purported stakeholders meeting and it was erroneously and vehemently rejected. Since the Chairman and other stakeholders are already aware that the said issues are being handled at the national level, consultations with relevant ADA organs would have been advisable before the meeting. The Chairman would definitely recall how previous attempts by ADA to engage some stakeholders in that direction failed.

“In view of the above, the ADA National Executive Committee still stands by the following decisions previously taken at the national community (not Local Government Area) level until the relevant national organs review them:

i. The IDPs Welfare Committee of the ADA will continue to handle and manage relief materials donated to or received by ADA for the benefit of IDPs within Adara community. We have no objection to the Kajuru Local Government IDPs Committee receiving and managing relief materials donated by or to government. We are appealing that the local government should not obstruct the work of the ADA IDPs Welfare Committee because individuals, groups and NGOs have the right to render voluntary humanitarian services.

ii. The last national resolution of ADA on the Kasuwan Magani market was during the National Working Committee on 6th December, 2019. The resolution is that Adara nation will continue to oppose the reopening and reconstruction of the market until government engages Adara Chiefdom in an attempt to address the grievances of all concerned. Furthermore, the community agreed to embark on protests if government continues to be adamant.

“The ADA National Executive Committee believes that national decisions of the association are in the best overall interest of Adara nation. But they can be reviewed by the same or higher organs only, when situations change. This is a standard administrative protocol to avoid conflicts, confusion or even chaos in formal organisations.”

I do not have N10m ransom, says Bayelsa Commissioner whose six-year-old son was kidnapped