A four months investigation in public primary schools across 16 out of the 20 local government areas of Bauchi state has revealed unconducive learning environment characterized by overpopulated classes, near total absence of sitting materials for both teachers and pupils, dilapidated structures and non-provision of instructional materials.

Over this period, our correspondents visited public primary schools in Bauchi metropolis and schools in Alkaleri, Dambam, Darazo, Dass, Ganjuwa, Jama’are, Kirfi, Misau, Ningi, Shira and Toro as well as Warji, zaki, Gamawa and Katagum local government areas and documented video clips and still pictures of the inhuman condition under which children receive lessons across the state.

The pathetic situation of the schools prevail despite the purported expenditure of N18,564,833,587.12 (Eighteen billion five hundred and sixty  four million eight hundred and thirty three thousand five hundred and eighty seven Naira twelve Kobo) cumulatively being the state contributions and those of the Universal Basic Education Commission UBEC from 2005 to date. The state is also finalizing processes to access the 2017 matching grant.

By the immediate left hand side as one faces the main gate of the Bauchi State House of Assembly complex situated along Bauchi- Gombe highway lies Ibrahim Bako Nursery and Primary School.

Established in 1985 and currently under the control of the state ministry of education, the school shares perimeter fence with the assembly complex on its southern plank as one drives into Ibrahim Bako Housing Estate.

In view of its proximity to the state legislators, one may think the school will be spared of the current rot in the state basic education sub-sector.

Alas, the school turns out to be the epitome of the unconducive teaching and learning atmosphere that characterized public primary schools in the 16 local government areas visited by our reporters.

With 6 blocks of fourteen classrooms, the school has a population of about 4000 pupils and a workforce of 49 teachers.

One of the teachers who conducted our reporters round the school confided with them that “in actual sense we do not know the exact number of our pupils, because children keep on coming everyday and we cannot send them away”.

Except classes 5 and 6 which have some desks used by the pupils on first come first sit basis, children in class 4 downward sit on bare floor with the classes full to the brim making it impossible for our camera lens to capture the entire pupils in each of the classes.

Not only are the pupils sitting on bare floor but the classes are so congested, that in a single class between 4 and 5 monitors are appointed to help the class teacher in controlling the pupils.

The children sit in rows shoulder to shoulder in their hundreds with little or no space to stretch their legs, parked in a 10/6 metre classroom designed to accommodate a maximum of 25 twin desks for 50 pupils.

Attendance is hardly called on daily basis as an entire period is required to call the names of the pupils contained in 5 to 6 registers per class.

This situation is however not unknown to the authorities of state Ministry of education which oversees the affairs of the school as one of the teachers narrated to us an episode during a visit to the school by the permanent secretary of the ministry and directors in company of the special adviser to the state governor on education and public enlightenment. 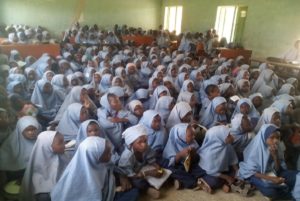 “Initially, we had our pupils chart pasted on a notice board in the headmaster’s office like what is obtained in such public schools.

True to his words, one of our reporters who visited the school’s head teacher on the 27th June, 2018 and signed a visitor’s book, scanned through all the office without seeing the pupils’ enrolment chart.

Ibrahim Bako Nursery and Primary School is not the only one affected by this seeming neglect of the basic education sub-sector, as authorities at Dangikka Primary School Bakaro established in 1970 also struggle to accommodate the 4219 pupils in the school’s 9 blocks of 20 classrooms-an average of 211 pupils per classes. 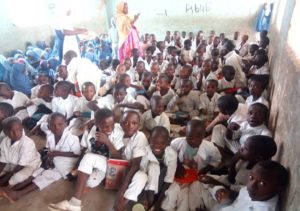 Separate classes for boys and girls to avoid teasing and bullying

To reduce the incidences of teasing, bullying and fighting in mixed classes that could further make teaching difficult for the teachers, some of the schools had to separate boys and girls, and therefore ‘A’ class is reserved for boys and ‘B’ for girls.

Pupils and students go to class with mats 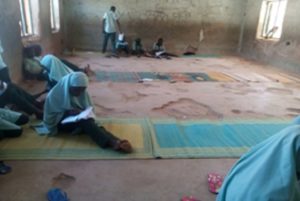 Across public primary schools in the 16 local governments areas visited pupils sit on bare floor in congested classes, making teaching and learning difficult for both the teachers and children.

The problem of lack of sitting materials which lingered for years in both primary and junior secondary schools (upper basic), forced some of the schools to device means of coming to the aid of their pupils by buying rubber mats and spread in classes. In some other cases the students devised their own ways by going to school with prayer carpets. 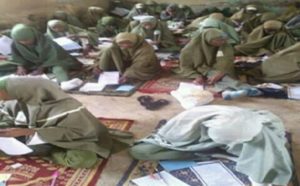 A head teacher in one of the primary schools in Bauchi metropolis had to lobby influential people around the school and succeeded in raising 85,000 Naira with which he bought 20 pieces of (big size) rubber mats at 4000 Naira each for use in classes.

Except for some of the blue zinced classes currently being constructed by the present administration across the state that are being provided with desks, investigation revealed that some schools were last supplied desks as far back as 2011-mostly 100 pieces according to our investigation.

When asked why the government has not released the allocated funds despite the magnitude of the problem, the state commissioner of Finance Alhaji Garba Sarki Akuyam said the state universal basic education is fully aware of the constraints government find itself.

The commissioner then referred us back to the board for further explanations, saying that he is satisfied with whatever answers given to us by the officials of the board on the matter.

The problem as observed by Radio Nigeria has persisted for years across public schools in the state to the extent that some pupils could start and finish their primary education without sitting on desks.

A class 4 pupil at Wuntin Dada primary school Muhammad Adamu who spoke to one of our correspondents confirmed that throughout his stay in the school government had not supplied them furniture and had to be going to school with nylon sack to spread on the floor.

The concern of his counterpart at Central Primary School Miri Ibrahim Murtala is not farfetched, as he had to wash his uniforms almost every day in order to appear neat.

Commenting on the situation, a lecturer with Abubakar Tatari Ali Polytechnic Bauchi and commentator on national issues Comrade Abdullahi Yelwa described the condition of public schools across the state as pathetic.

“Incompetent teachers, overcrowded classes and lack of teaching materials are visible challenges while the entire educational system still remains poor and efforts at the higher levels not productive due to failure of the base”.

To fix what he called the sorry state of the basic education sector Comrade Yelwa suggested that “all public office holders making positive claims about the schools should enroll their children into such schools to proper understand the reality in such schools”.

Also, a teacher in one of the schools in Bauchi metropolis (name withheld) described the congestion in public schools as “super crowding, pathetic and annoying”.

On attendance registers, schools could have up to 9 arms (A-I) in one class, but on the ground the classes are merged together due to inadequacy of classes and dilapidation of the existing ones. 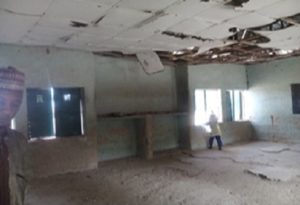 While responding to Radio Nigeria’s enquiries, the state Universal Basic Education Board said the unconducive nature of public primary and junior secondary schools is age long problem inherited from successive administrations in the state.

The Board’s Director of Planning, Research and Statistics Abubakar Mansur Abdu who spoke to our correspondents on behalf of the chairman Professor Yahaya Ibrahim Yero acknowledged that most pupils in public schools sit on bare floor to receive lessons. In his words “when we went round, you hardly find a school with complete set of furniture even within Bauchi metropolis”.

Yahaya Yero who described the situation they met on the ground in public schools in 2015 as pathetic said their administration immediately swung into action by upsetting the backlog of UBEC Matching Grants of 2014 and 2015 that were not accessed by the previous administration and 2016 cumulatively to the tune of N5,742,162,161Naira. The state according to him is also finalizing arrangement to access the 2017 matching grant to the tune of N1,286,343,183.55.

Renovation of about 1000 blocks of classrooms

The money according to the board’s chairman was immediately deployed for renovation of dilapidated classrooms, construction of new ones and purchase of furniture to make teaching and learning conducive in the schools.

This as he claimed enabled the renovation of 836 dilapidated blocks of 2 and 3 classrooms in ECCDE centres (Early Childhood Care and Development), Primary and Junior secondary schools, and the construction of 130 new blocks in the last 3 years.

On the dearth of pupils’ furniture across the schools, Yero said the board has provided about 43,460 twin desks, teachers table and ECCDE chairs worth 666,831,777 million Naira using the three matching grants accessed from UBEC so far.

“We now have a policy that every class either newly constructed or renovated will have to provided with desks and teachers table to reduce this problem of dearth of furniture in our schools”.

He however acknowledged that the problem of sitting materials still persist in the schools because of the magnitude of the problem they met on the ground.

Under the 2016 UBEC Intervention, Radio Nigeria’s investigation revealed that the board gives contract for 50 primary school twin desks, teachers table and chair for one block of two classrooms (25 desks per class) at 1,336,000 (one million three hundred and thirty six thousand Naira). This is equivalent to 24,026 per twin desk.

For upper basic schools (Junior Secondary Schools) the contract amount for 50 twin desks, teachers table and chair for one block of two classrooms (25 desks per class) is 1,440,000 (One Million Four Hundred and Forty Four thousand Naira) or around 27,000 Naira per twin desk.

Chairman of the Nigeria Union of Teachers in the state Comrade Danjuma Sale acknowledged that the present administration has renovated appreciable number of dilapidated classrooms and constructed new ones in some public schools across the 20 local government areas.

On the issues of congestion, absence of sitting materials and non-provision of instructional materials in the schools Comrade Danjuma Sale attributed the situation to the desire by parents to get their children educated resulting, in over population thereby overstretching the existing facilities.

While calling on the government to properly plan for the sector to contain the current high demand, the NUT chairman emphasized that education should not be left for government alone in view of the numerous challenges and demands in the sector.

▪This story is the first in the series as part of an investigative journalism fellowship of the Wole Soyinka Centre for Investigative Journalism (WSCIJ); the fellowship was funded with the support of Mc Arthur Foundation.