I will not appear before APC investigation panel, Deputy National Chairman declares

Citing the illegal conduct of the National Working Committee (NWC) of the All Progressives Congress (APC), its Deputy National Chairman (North), Senator Lawali Shuaibu, has told an investigation committee of the NWC set up to probe him point blank he would not appear before it.

As far as he is concerned, it is the National Executive Committee (NEC) that can investigate any alleged offence he commits and not a committee of the NWC.

Nigeria Everyday reports that in addition to giving Oshiomhole a pat on the back for a job well done so far, the APC NWC, according to a statement by its spokesman, Mallam Lanre Isa-Onilu, set up a five-man committee to investigate Shuaibu for:

▪ The allegation leveled by Shuaibu against the National Chairman on issues involving the collective decisions of the National Working Committee.

▪ The instigation of Senators/Members of the House of Representatives by Senator Lawal Shuaibu against the decision of the Party on the choice of the Presiding Officers for both chambers (Senate and the House of Representatives) at the banquet Hall, Presidential Villa, even when these issues were all discussed and agreed by all members of the National Working Committee (NWC).

“Sen. Lawal Shuaibu’s action was particularly embarrassing by moving around the Senators/Members of the House of Representatives to revolt while Mr. President was making his concluding remarks on the need for APC to present one candidate to avoid a divided house”, an APC statement revealing the resolutions of the NWC, signed by its spokesman, Mallam Lanre Isa-Onilu, said.

The Investigation Committee is to submit its report to the NWC next week.

Part of the letter attached below reads: “Let me repeat again as In my letter to the Chairman, you CAN’T BE A JUDGE IN YOUR OWN CASE! And to even say he was seated there to accept a vote of confidence as well as preside over setting up a committee to punish the member that accused him!

“Those eminent leaders of the All Progressives Congress had fairness on their minds on matters of discipline and disciplinary procedures when they drafted the constitution. They entrusted the matter of discipline In the party to the larger Executive Committees and not a group of few members of the party some of who might probably be culpable in some instances.

“Otunba my honest advice to you is, since you are the closest ch member to the Chairman, in order not to drive the Party into the muds, always insist on following the due process of law in whatever he wants to commit the Party to. All he needs to do is to work closely with the Legal Adviser and not to mock his advice because if we find any failure in that instance you can not blame the Lawyer. Niyi you are also a Lawyer why cant you tell the Chairman whether something is right or wrong? Since Presdent Buhari and I met when he joined partisan politics in 2002, l have always known him to insist on due process of Iaw. In those days in the ANPP when he was trying to learn how the game was played, his consistent comment at NEC meetings was ”let us do what the constitution says, in that way some of us that are learning the way it is done will understand quicker and better”

“Now let us look at the process, the fact that the NWC members, before resolving to set up your committee had earlier passed a vote of confidence on the Chairman puts some doubt to its purpose.

“You have already put the cart before the horse. I never expected to receive your letter to investigate me on what I said of the Chairman as there couldn’t have been any need again.

“I was Initially gladdened by an earlier statement by the National Publicity Secretary In his media reaction to my letter, that ”the issues raised in the letter are between two leaders”. I wonder at what stage it became a National Working Committee (NWC) issue again. I can equally imagine how the NWC, an Important organ of the party could convene what was described as a regular meeting for which less than 24 hours notice was given, specifically to discuss my opinion on the chairman and even issue a communique in that regard.”

The letter by Shuaibu: 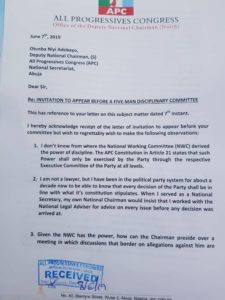 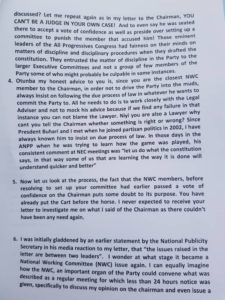 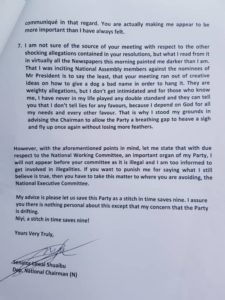