Atiku, who Tuesday visited Governor Serials Dickson, is on a whistle-stop visit to States controlled by the Peoples Democratic Party (PDP). 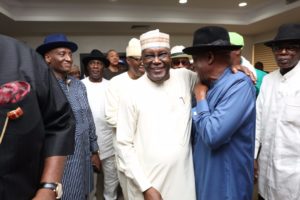 Jonathan and his guest expressed optimism that the Peoples Democratic Party (PDP) has what it takes to return to power in 2019, stressing that the main opposition party which lost the Presidential election in 2015, is getting stronger.

Speaking on the chances of PDP returning to power at the federal level, Jonathan noted that the party is getting stronger, affirming that PDP is now better poised to win the 2019 Presidential election.

He said further: “Yes, we had some issues in 2015. But as you know politics is a very dynamic business. I believe PDP is coming back and getting stronger. Even though we are in the opposition with fewer Governors, PDP is still the strongest and largest party.”

Dr. Jonathan said he was pleased that the former Vice President (Atiku) who came to Bayelsa to commission State Government projects was able to pay him a visit. He added that he had enjoyed a long relationship with Atiku, beginning from when he was a Deputy Governor
in Bayelsa State.

In the same vein, former Vice President Atiku insisted that only the PDP has the strength and structure to win the Presidential election and return to Aso Rock in 2019.