The Independent National Electoral Commission (INEC) has officially announced through its Chairman, Prof. Mahmood Yakubu, on Friday that Senator Duoye Diri of the Peoples Democratic Party (PDP) is new Governor of Bayelsa State.

He said in Abuja that a certificate of return will issued to Diri as directed by the Supreme Court. 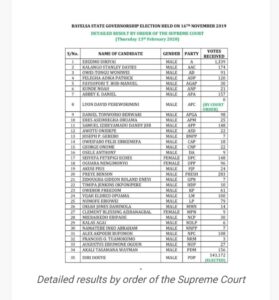 The social media remains agog with comments, counter-comments, rage, and of course, joy by beneficiaries of Thursday’s unexpected ‘declaration’ of Senator Duoye Diri of the Peoples Democratic Party (PDP) as the winner of last November’s gubernatorial elections in Bayelsa State.

One professor of surgery added medical spin to the drama with his own post on hearing the verdict:”Hahahahaahahaha…. Give Imo back to APC and take Bayelsa back to PDP…. Exchange Blood Transfusion…”

One other post to Nigeria Everyday toes the same logic: “Say, is this a compensation for the Imo saga? Just thinking  aloud.”

Just like the PDP was livid when it lost Imo State in a Supreme Court judgement to the All Progressives Congress (APC); now, with the tables turned, the APC is screaming blue murder.

APC’s National Chairman, Comrade Adams Oshiomhole, sent a chill through the country when he declared: “If as the Supreme Court has ruled, David Lyon cannot now be sworn in as governor and as the person who has the highest number of votes and the spread to be sworn in, it simply means from tomorrow (Friday) there will be no government in Bayelsa State.”

In response, the PDP cautioned Oshiomhole to keep away from Yenagoa. Its National Publicity Secretary, Mr. Kola Ologbondiyan said, “The Peoples Democratic Party (PDP) describes the comments of the factional National Chairman of the All Progressives Congress (APC), Adams Oshiomhole, on the ruling of the Supreme Court on the Bayelsa State Governorship election as an empty and inconsequential ranting.

The party warned Oshiomhole, to steer clear of Bayelsa state as his apparent plots to trigger violence in the state has failed.

The PDP further counseled Oshiomhole to be careful with his utterances and not use any forms of venomous garrulity and clear misuse of language to destabilize our nation and truncate our hard earned democracy.

The people of Bayelsa state knows as a fact that the Independent National Electoral Commission (INEC) under our laws, cannot take instructions from any individual, let alone a factional national chairman of a dysfunctional political party like the APC.

The PDP, as a law-abiding party, counsels Oshiomhole to rein in himself and desist from all odious designs against Bayelsa state, her people and government.

The PDP also calls on the people of Bayelsa state to remain calm as their mandate has been restored and cannot be taken away by the ranting of any individual who has no stake whatsoever in the wellbeing of his own home state.

Recall that that in less than 24 hours to his official inauguration, the Supreme Court Thursday sacked Mr David Lyon, of the All Progressives Congress (APC) as the governor elect for Bayelsa state, while he was busy with rehearsals for his take over. 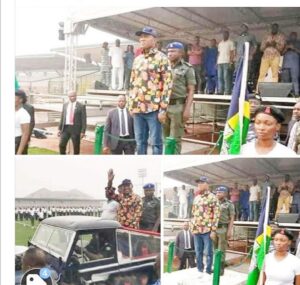 In another drama, PDP flags at the major roundabout leading to the Government House, Yenagoa, were pulled down and replaced with the APC’s.

The apex court, in a unanimous judgment nulified and set aside the nomination and participation of Lyon and his running mate, Biobarakuma Degi-Eremienyo in the November 16, 2019 governorship election.

In the judgment delivered by Justice Ejembi Eko, the apex court held that the running mate to the governor elect forged certificates to secure clearance for APC deputy governorship ticket.

Justice Eko in the verdict that lasted about 30 minutes, held that it was established from the documents submitted to INEC that the deputy governor elect forged certificates, and fraudulently used different names when it suited him.

The apex court said that the deputy governor elect and his political party, APC did not dispute the fact deposed to by the appellant that the multiple names were clearly and fraudulently used in the form CF001 submitted to the electoral body.

The apex court also held that an affidavit of regularisation of names purportedly done by the deputy governor elect and published in the Chronicle newspaper was a futile attempt to justify the multiplicity of names submitted to IiNEC and contained on the certificates.

The Supreme Court therefore came to the conclusion that the primary school certifacate obtained in 1976; GCE in 1984; first degree in 1990; and others were products of forgery, adding that the deputy governor elect violated section 182 of the 1999 constitution.

Justice Eko upheld the judgment of Justice Inyang Ekwo of the Federal High Court, Abuja that the case of forgery has been established going by the documents presented by Degi-Eremienyo with various names.

The federal high court judge was commended for his brilliant findings in his judgment.

The judgment of the Court of Appeal which held that a case of forgery was not established against Degi-Eremienyo was set aside for being pervasive.

The court, therefore, voided the joint ticket of David Lyon and his running mate and set aside their participation in the November Bayelsa governorship election.

Justice Eko ordered that the certificate of return already issued to the governor-elect by INEC be withdrawn immediately and that a fresh one be issued to the candidate who scored the second highest number of lawful votes with geographical spread and with requisite qualification.

With the judgment the governorship candidate of the Peoples Democratic Party (PDP), Senator Diri, with the highest lawful votes and with wide geographical spread will eventually become the next governor of Bayelsa.