Senator Ovie Omo-Agege has been arrested over the ugly incident that led to the snatching of the mace, the Senate’s symbol of authority by thugs who accompanied him into the Red Chamber, while the Senate was in session. He was picked at about 2:00 p.m. as he stepped out of the chamber.

His arrest followed what the Senate described as treason, and after a joint session of the of Senators and House of Representatives members gave the Inspector-GeneraInspector-General and Director-General of the State Security Services 24 hours to retrieve the mace.

House members had joined Senators in their Chamber after the ugly incident that sent shock waves across the country.

The All Progressives Congress (APC) frowned at the invasion of the Nigerian Senate by suspected thugs who disrupted Wednesday’s plenary and made away with the mace.

In a statement Wednesday, it condemned the action and viewed it as an attack on our democracy and a desecration of the hallowed institution of the National Assembly.

“We therefore call on security agencies to take all necessary actions to recover the stolen mace and ensure that the perpetrators and their sponsors are brought to justice,” it said.

Omo-Agege, representing Delta Central Senatorial District, did the unimaginable around noon Wednesday when he stormed the Upper Legislative Chamber with about 10 hefty-looking, broad-chested, and fully armed men to remove the mace of the Senate while in session. It is a first in the history of this National Assembly in its nearly 19 years. 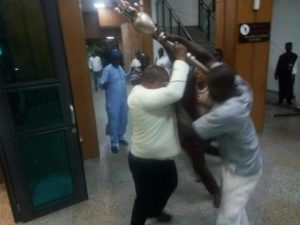 The attempts by the Sergeant-at-Arms personnel to stop the thugs could not match the thugs, who appeared ready to use their guns, even as they marched triumphantly away to their cars.

The men, who came with the Senator drove away in two Sports Utility vans (SUVs) with the mace, but Omo-Agege, in court challenging his 90 days suspension, sat down to a closed-door deliberation with his colleagues.

Efforts to have him removed failed as other Senators of his Buhari support group disbanded by the Senate the day he was suspended resisted the move.

Fearing a resort to violence, presiding officer, Deputy Senate President Ike Ekweremadu called for a closed-door session, as a spare mace was brought in. Senate President, Dr. Bukola Saraki, is out of town.

It was gathered that Omo-Agege allegedly provided the cover for the thugs to defile the sanctity of the Red Chamber, because when he was stopped at the security gate of the National Assembly complex, he allegedly told security operatives that the SUVs were part of his convoy.

However, Assembly sources suggested that there was complicity on the part of agencies watching over the lawmakers.

“For the nearly 10-15 minutes the scuffle for the mace lasted, all the security agencies, including the armed ones did not show up. Like Danjuma said, they were given a covering. Someone turned a blind eye while these ferocious men operated,” he added.

In a reaction, the Senate issued a statement. It said through its spokesman, Senator Aliyu Sabi Abdulahi:  “Today, some armed hoodlums led by suspended Senator, Ovie Omo-Agege, walked into the Senate plenary and seized the symbol of authority of the Upper Legislative Chamber, the mace.

“This action is an act of treason, as it is an attempt to overthrow a branch of the Federal Government of Nigeria by force, and it must be treated as such. All security agencies must stand on the side of due process and immediately mobilise their personnel to retrieve the mace and apprehend the mastermind and the perpetrators of this act.

“This action is also an affront on the legislature, and the leadership of the House has come to express their support against this action.

“The Senate is now in an Executive session.

“An updated statement will be released immediately after the closed door session.”

How I escaped been compromised – REC Agbaje

Videos: Joint session of National Assembly; the affront on Senate

Videos: Joint session of National Assembly; the affront on Senate

ICDA disagrees with IPOB, says Igala can never be part of Biafra

ICDA disagrees with IPOB, says Igala can never be part of Biafra