CAN President, Dr. Samson Ayokunle, in the midst of protesters at the Orita Meta Baptist Church in Ibadan, Oyo State.

Following a call by the President of the Christian Association of Nigeria (CAN), Dr. Samson Olasupo Ayokunle, for Christians to protest killings across the country, christian adherents on Sunday trooped out en masse, some as instructed within church premises, while others took to the streets of different cities and towns in the country.

In Jos, Plateau State, the Senior Pastor of Evangelical Church Winning All (ECWA) Good-News Church, Rev. Joshua Tuwan, who led the protest said several excuses being spewed out by the Federal Government had shown that the administration of President Muhammadu Buhari “is clueless about governance.”

He therefore called on Nigerians to vote out the present government of the All Progressives Congress in the 2019 general elections.

According to him, far as history is concerned, the city of Jos remained the umbilical cord of the gospel in Northern Nigeria.

He said, “Significantly, we are part of CAN and the ideals for which they stand which is justice and righteousness. We have decided to come out because we feel we have been quiet for a very long time.

“We elected the leadership of the present government because we believe in them. We came to the conclusion that three years is enough to get results. And the fact that no result is coming out but only in the media with continuous killings in tens and twenties, calls for serious concern.

“Enough is enough; that is why we feel compelled in our conscience not to be quiet about the things that are happening in our country. We all know, three years back, we stood and voted this government into power with the full understanding that they were going to turn the situation for all Nigerians.

“But the reverse is what we are seeing; the many excuses that the government has advanced have shown clearly  that they are clueless about governance. If one of the most important thing a government should do which is the protection of lives and property, and for three good years,  this country will be held by few individuals that are yet to be identified with their names, then something is wrong.

“I remember the former Head of State of Nigeria, late Gen. Sani Abacha. He said if any problem will last more than 24 hours, then the government is part of it. Abacha is dead, but the truth remains truth. We have discovered that this problem is taking a dimension to eliminate certain group of people and these people are identified collectively by what they believe in.

“We stand to oppose and to tell the world that this government must rise up to its responsibilities and ensure that the culprits behind the killings are arrested. We want them to be prosecuted, if this government means serious business or else since 2019 is coming, Nigerians should show them the way out.

“We want to say something, this is religious. For you to declare that a group of collective students are taken away and for all to be free with one (Leah Sharibu) kept and that person is a christian, we want members of the National Assembly, the State Houses of Assembly and indeed every person that there is truth and we want the truth to stand out. The situation appears as if everyone is caged. But we believe that our freedom is just by the door.

“We want Leah Sharibu to be out. We do not understand what is going on in the hearts of the parents of the Chibok girls. These girls were abducted because of their faith. If this government is not religious, let them produced these girls. We will continue to shout, let the security agencies begin and start picking us up. Let us see, if there are no citizens, whether there will be government. Everyone is scared, but we believe that freedom is just by the door.”

Last week, in reaction to the killing of two priests and 17 worshippers of St. Ignatius Catholic church, Mbalom, Gwer East LGA of Benue State, CAN had declared Sunday, 29 April, 2018, as a National Day of Protest against unending killings in the country.

It also dedicated the same day for prayers for the freedom and liberty of Leah Sharibu, the remaining Chibok Girls and others still in captivity of the Boko Haram terrorists.

CAN urged Christians in Nigeria to hold peaceful protest on the date, in the premises of their churches asking the Federal Government and the security agencies to stop the unending killings and bloodshed in the country.

CAN appealled to the government of President Muhammadu Buhari to mount different effective plans towards disarming herdsmen across the northern states and in communities where they have been wreaking havoc across the country.

It noted that the failure of the government to raise an effective campaign against the killings by herdsmen is the reason they have continued to kill, while there was no visible plan to pacify the aggrieved.

The Association also called on the heads of the security agencies to wake up to their constitutional role of protecting lives and property across the federation, while preventing Nigeria from descending into chaos and a lawless country.

CAN recalled with pains, disappointments, and worries how Nigerians in the North East, Middle Belt and southern parts of Nigeria become visibly endangered with sustained attacks from Boko Haram, herders and armed bandits. It contends that such developments are not only inimical to the progress of Nigeria, they will continue to weaken the unity of the country if left unchecked

CAN urged all and sundry to continue to pray for peace and tranquillity of Nigeria and most importantly, for the parents and relations of all abducted schoolchildren.

In Benue, it was a mourning Sunday as many churches in Makurdi Benue State, complied with the directive of the Christian Association of Nigeria (CAN) to protest the killings in different parts of the country by herdsmen and those under the captivity of Boko Haram.

It would be recalled that two Catholic priests, Rev.  Father Joseph Gor and Rev. Father Felix Tyolaha, as well as 16 other worshippers were killed at the 5 a.m. mass of the church on April 24.

A correspondent of the News Agency of Nigeria (NAN), who went round some churches in Makurdi, reports that most worshippers, regardless of denomination, wore black and white dresses to church.

NAN also reports that the worshippers held peaceful protests within their churches to denounce the acts of barbarism and gruesome killings and other attacks on innocent citizens.

They held placards with inscriptions such as “Enough of the killings”, “We want peace in our state”, “No more bloodshed”, “Lord, what have we done to deserve this.’’  among others.

At the NKST church in Iyortyer, Makurdi, NAN sighted the worshippers carrying placards and marching peacefully within the premises of the worship house.

Speaking to newsmen, Pastor Frederick Ikyaan of NKST Church at High Level area of the metropolis, said the Christian community was mourning.

“We are saddened by these killings and we want the world to know our displeasure over these acts,’’ he said.

He said that the dress code was reminiscent of the tradition of the church in wearing sack clothes when faced with such calamities.

“In the olden days, Christians wore sack clothes when confronted with calamities of monstrous nature but since we no longer have such clothes, we wear black and white to show our grief and anguish.

“Our concern is to express our displeasure and feelings to the immediate society, our leaders in Nigeria and President Buhari, without mincing words that we are offended by the ongoing killings in the state and the  country,’’ he said.

He said that with the killing of the priests and worshippers, it was very clear that the invaders were not after the green vegetation but the soul of the state.

The cleric said that the killing of the priests had further deepened their faith and beliefs system, adding that no amount of intimidation would stop them from practising their faith.

He said that the priests and faithful killed had become martyrs of the herdsmen invasion in Benue, adding that they were the seeds sown by the church.

Also speaking, the Associate Pastor of NKST Church, Iortyer, Rev.  Terwugwa Akaawude, appealed to the Federal Government to protect lives and property of the citizens.

Odeh said politicians were bereft of conscience in handling such sensitive matters as the killings, adding that the death of the two priests had united the church and made it stronger.

The cleric, who said the priests and worshippers died in active service, described them as” gallant soldiers who never lost their faith.’’

He said they would be rewarded in eternity by God.

NAN reports that a combined team of security operatives were seen patrolling the state capital, while the church services were ongoing.

Protesters Nationwide in Photos and Videos: 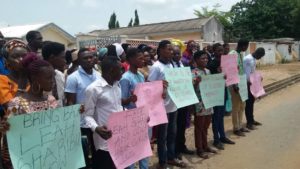 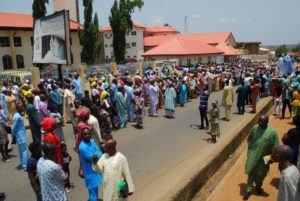 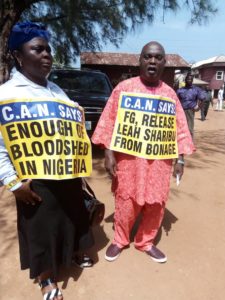 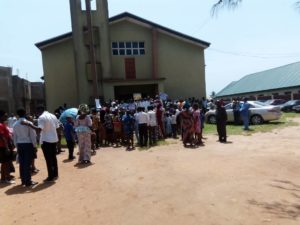 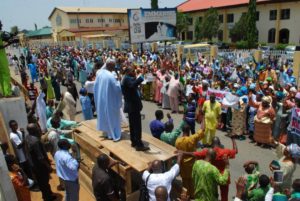 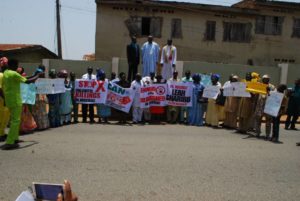 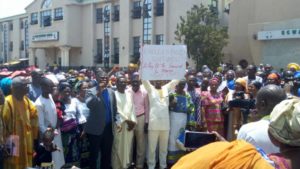