Air Force, Police and SAD chiefs that met in Abuja

Bandits operating in Zamfara appear to be inching towards Abuja, but nemesis almost caught up with some others along the Abuja-Kaduna highway when they got more than they bargained for with the sudden appearance of Governor Nasir el Rufai on the road as they operated Wednesday.

At a meeting with the Chief of Air Staff, Air Marshal Sadique Abubakar, and Director-General of the Department of State Services, Yusuf Bichi, Acting Inspector-General, Mohammed Adamu, disclosed that as a result of the onslaught by security agencies against armed bandits in Zamfara State, the criminals had moved towards the Abuja axis to carry out their nefarious activities.

Adamu met with Sadique and Bichi as part of efforts by the Air Force, DSS, and Police to synergise efforts to combat insecurity, especially banditry.

As the meeting was held in Abuja, the convoy of the Governor of Kaduna State, Malam Nasir Ahmad El-Rufai, foiled attempted kidnapping of motorists along Kaduna-Abuja road.

A day earlier, the spokesman of the Nigeria Meteorological Agency (Nimet), Muntari Ibrahim, was kidnapped on the notorious highway, just a few kilometres from the country’s seat of power.

Because of the notoriety of the road, many, including top government officials, prefer the two hours train ride between Abuja and Kaduna.

A statement by el Rufai’s spokesman, Mr. Samuel Aruwan, said the Governor who was on his way to Abuja got to the Akilubu village around 3:40pm, sighted dozens of vehicles parked by citizens alarmed that kidnappers were ahead.

Security operatives in the governor’s convoy advanced and cleared the road of the criminals who fled into the forest.

After clearing the road, Governor El-Rufai directed that travelers who had been wounded by the criminals be rushed to the nearest hospital. The Governor also directed security agencies to intensify patrols and permanently clear the road of the bandits. 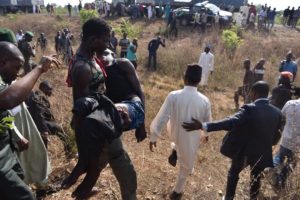 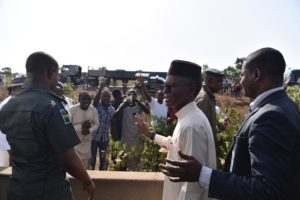 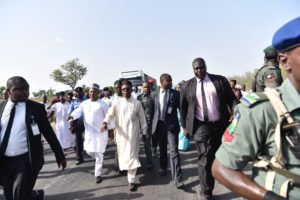 Meanwhile, according to the Air Force, as part of inter-agency cooperation to address security challenges in the country,  especially the issue of kidnapping and armed banditry along the Abuja-Kaduna Highway and Kaduna-Birnin Gwari axis, the Nigerian Air Force (NAF) has reiterated its commitment to support the Nigeria Police, Department of State Services (DSS) and other security agencies with real time ‪geospatial and imagery intelligence.

Its spokesman, Air Commodore Ibikunle Daramola, said the Air Chief disclosed that the Force will make available its air assets for the ‬conduct of tactical air support missions and ‪increasing the frequency of air reconnaissance‬ in the affected areas.

The IGP and DG DSS on arrival at NAF headquarters immediately went into a closed-door meeting with the CAS before undertaking a guided tour of facilities at the newly established, state-of- the-art Geospatial Intelligence Data Centre (GIDC) and Strategic Air Operations Centre (SAOC).

The GIDC, which is equipped with high-tech computer hardware and software, was established to enhance‪ the acquisition, analysis,  interpretation and exploitation of imagery and geospatial information to provide actionable intelligence for the Armed Forces and other security agencies, while the equally well-equipped SAOC is expected to greatly enhance the coordination of air operations in support‬ of internal security operations across the Country.

While inspecting the facilities, the Acting IGP expressed delight and satisfaction with the cutting edge technologies and sophisticated computer software at the Centres. He said the essence of the visit to the CAS was to explore possibilities of using NAF air assets and the products of the GIDC to improve the effectiveness of operations to deal with issue of kidnapping and armed banditry, especially along the Kaduna-Abuja Highway and other parts of the country including Kaduna, Zamfara, Katsina, Niger and Kogi States. 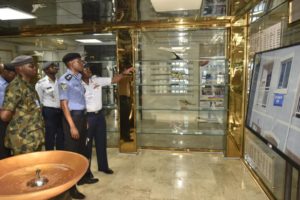 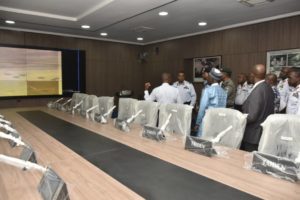 “I felt that as a security agency, we need to synergize with other security outfits. We don’t have the air capability but the NAF has them. With this we can have a joint operation to deal with this security issue”, he said.

The IGP appreciated the CAS for making NAF air assets available for the operation and also availing the NPF and DSS of the capabilities of the GIDC and SAOC. He also congratulated him for emplacing such facilities and making them available to other security agencies to enhance internal security operations for the benefit of the Nigerian people.

Onnoghen in surprise closure of defense at CCT

He is renovating a lot of hospitals, making them fit for purpose

He is renovating a lot of hospitals, making them fit for purpose