Ambode is a goner on APC ticket as Lagos primaries postponed

Except a miracle happens, Governor Akinwumi Ambode, is a goner as far as the All Progressives Congress (APC) ticket is concerned. There are also alleged plans to stifle him further in the remaining months of his tenure.

However, in a surprise announcement, the APC National Chairman, Comrade Adams Oshiomhole, disclosed that Lagos and Imo Governorship primaries have been postponed to Monday for reasons of logistics.

There are also unconfirmed reports that APC leader, Bola Tinubu, was booed as he made his way to Acme road office of APC. He was said to have beat a retreat

Ambode may need another political platform to contest the gubernatorial polls, if he survives an impeachment. The impeachment card is a resort if he chooses not to go quietly, it was gathered Saturday.

Every effort by the Presidency, APC Governors, and chieftains has failed to impress APC strongman in the South-West, former Governor, Senator Bola Tinubu, who insists Ambode must go. He is believed to be behind the move to flush out the sitting Governor.

Dr Obafemi Hamzat, one of the major contenders for the All Progressives Congress (APC) governorship ticket in Lagos, on Saturday, stepped down for Babajide Sanwo-Olu.

Hamzat’s move took place as photos emerged showing that 36 of the 40 members of the Lagos State House of Assembly opted to back Sanwo-Olu against Ambode. 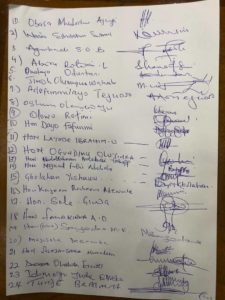 The News Agency of Nigeria (NAN) reports that Hamzat’s withdrawal leaves Sanwo-Olu and the incumbent governor, Akinwumi Ambode as the only contenders for the party’s ticket in its primaries scheduled for Sept. 30.

The resolution of the State lawmakers to back Sanwo-Olu reads: “At the Parliamentary meeting held on 29th September, 2018 at the Lagos State House of Assembly Complex, members do hereby unanimously resolve to support the position of the Leadership of All Progressive Congress(APC) and the Governor’s Advisory Council(GAC) in Lagos State on the endorsement of Mr. Babajide Sanwoolu as the APC Gubernatorial candidate in the 2019 election.”

NAN recalls that Hamzat, also a governorship aspirant of the APC in 2015, was a Commissioner for Works and Infrastructure in Lagos.

Addressing newsmen in company of Sanwo-Olu and some supporters in Lagos, Hamzat urged his supporters to vote for sanwo-Olu in the party’s primaries.

Explaining his reasons for stepping down, Hamzat said that it was borne out of the greater good for Lagos than the benefit of an individual.

“After due consultation with my numerous supporters and in deference to the wise counsel of those I consider my political mentors, I resolved to step down from the governorship race.

“Apart from the fact that I can vouch for his personal integrity, great humility and extraordinary intelligence, Sanwo-Olu is someone I have had close interaction with in the past.

We have worked closely with Asiwaju Ahmed Tinubu and Vice President Yemi Osinbajo, who was them the Commissioner for Justice and Attorney General of Lagos State.

“Haven been part and parcel of the formulation and execution of various policies and programmes that transformed Lagos right from former governors Tinubu and Babatunde Fashola’s administrations, I strongly believe that Sanwo-Olu is equally rooted to fly our party’s flag in the 2019 elections.

“I have no doubt that he is well placed and equipped to take Lagos to greater height, hence my stepping down for him.

He commended members of the party for their loyalty, pointing out that the party‘s progress and winning elections in Lagos was because of their commitment.