Tinubu wants to ride on treachery to the villa 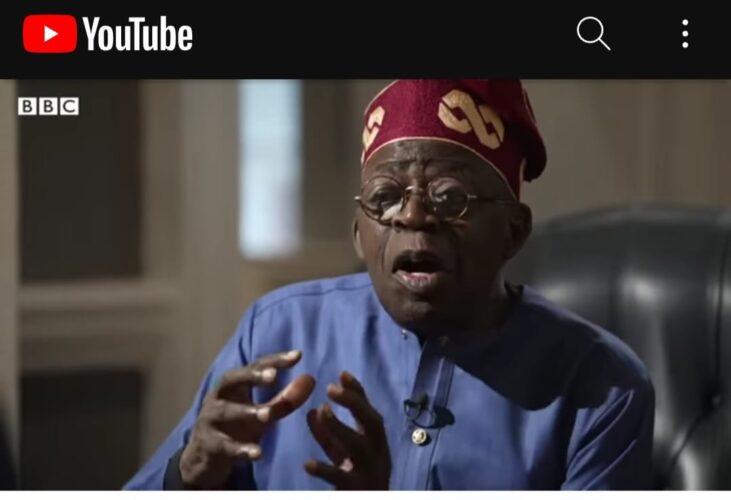 By Phrank Shaibu
Apparently miffed by the reactions that have trailed his ignoble meeting with the G-5 Governors, the Presidential candidate of the All Progressives Congress (APC), Asiwaju Bola Ahmed Tinubu, told a barefaced lie by denying ever meeting the governors in London.
Incidentally, Governor Nyesom Wike, who is known for his bravado, had failed to deny ever meeting with Tinubu, saying instead that “They said we had a meeting with so and so. What is your problem?” I make bold to state that if the G-5 never met with Tinubu, Wike would have been the one to deny it.
Curiously, while the news of the meeting, which was reported by several credible media houses was trending, two spokesmen for the APC Presidential campaign, Festus Keyamo and Femi Fani-Kayode, took to social media to celebrate the support Tinubu would be getting from the G-5.
On Facebook, Fani-Kayode specifically stated, “The endorsement and declaration of support that Bola Ahmed Tinubu will get from at least six (not just five) governors from the PDP this January will finally put to rest the delusion that Atiku will stubbornly harbour about winning the 2023 Presidential election.”
It is funny that it took three whole days after reports of the meeting before Tinubu decided it was time to put out a statement denying it ever held. It is also awfully coincidental that the G-5 and Tinubu all decided to travel to London at the same time and depart at the same time with Tinubu proceeding to Saudi Arabia and the other governors returning to Nigeria.
Incidentally, Tinubu had also in August denied plans of meeting the G-5 only for Wike to later issue a statement confirming that they indeed met with Tinubu and other candidates separately. Tinubu’s latest denial should therefore be discarded as another lie.
For Nigerians who wonder why Tinubu would deny such a meeting ever held, the reason is because the details of the meeting are too messy and the APC candidates in the five states are fighting back .
All the G-5 governors are on the ballot  except for Governor Wike and there is a fight back from the APC governorship and National Assembly candidates from the affected states where the G-5 Governors hold sway.
In Oyo, Senator Teslim Folarin is reportedly angry at a proposed treacherous deal to trade off his mandate as the APC governorship candidate. The situation is not different in Abia, Enugu , Benue and of course Rivers state.
This larcenous move exposes the nature of the man who wants to be the next President of Nigeria. Tinubu, a man who is yet to explain to Nigerians his ignoble role in the infamous heroine trafficking case which led to his forfeiture of $460,000, is a treacherous man who is more of a dealer than a leader. He will trade off all his loyalists for power.
This desperation was brought to the fore in 2011 when Tinubu removed the rug from under Nuhu Ribadu of the Action Congress of Nigeria (ACN) and made a deal with the Federal Government to ensure that President Goodluck Jonathan wins.
All these machinations will end in failure for Tinubu because Nigerians have decided that their future will not be put in the hands of a man who is willing to trade their destinies for a mere porridge or agbado?
The truth is that no amount of horse-trading can make Nigerians forget the torture they have been subjected to in the last nearly eight years of the APC.
Nigerians are far worse off than they were in 2015. The faces of frustrated motorists queuing to buy petrol during the Yuletide are a graphic reflection of life under the APC where road travel to any part of the country has become a journey through the valley of the shadow of death.
Seemingly, this Yuletide saw Nigerians starving as the price of food stuff has hit the roof with inflation at a staggering figure .
In the last seven and a half years of the APC, the Academic Staff Union of Universities (ASUU), spent a combined two years on strike with innocent students paying for the bad governance and maladministration of the APC. According to the National Bureau of Statistics (NBS), at least 133 million Nigerians live in abject poverty. That is more than the combined population of Cape Verde, Guinea Bissau, Gambia, Mauritania, Liberia, Sierra Leone, Togo, Benin, Guinea, Senegal and Mali, making Nigeria the poorest nation in the world.
On the watch of the APC, violent and mindless killings have become commonplace. Nearly 5,000 Nigerians were killed in the first half of last year, the Nigerian Security Tracker operated by the Council on Foreign Relations stated.
In Kaduna State where the APC is fully in charge, bandits took over the international airport and bombed a train, kidnapping several passengers who had to pay billions to secure their release. There were also attacks at a Catholic church in Ondo where 40 worshippers were killed while at the Kuje Correctional Centre, many terrorists were released with most of them still on the loose.
The United States and other countries had to advise their citizens not to visit Abuja because of the clear failure of the APC. Rather than apologise to Nigerians, the APC is now selling a false message of renewed hope through Tinubu, the party’s national leader. How can those who plunged us into the current mess be the solution to the same mess? Balderdash!
The problems plaguing Nigeria will determine how citizens vote and not the political horse-trading of a ‘corn-man’.
▪︎ Shaibu is Special Assistant, Public Communication to Atiku Abubakar, Presidential candidate of the Peoples Democratic Party (PDP)