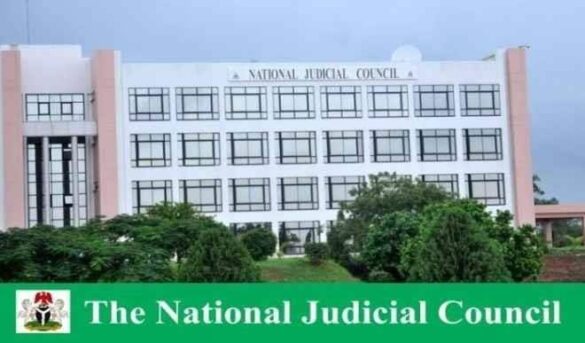 The National Judicial Council (NJC) has recommended appointment of nine Heads of Courts and 84 other judicial officers as parts of concerted efforts to prepare for challenges that may arise for Judiciary in the coming general elections.

The recommended persons would after appointments serve at the Federal and State Courts in the country.

A statement from the Council in Abuja said that the candidates were presented for recommendations by its panel of interview during its 100th Meeting presided over by the Chief Justice of Nigeria (CJN), Justice Olukayode Ariwoola.

A breakdown of the recommended 84  Judicial officers showed that four are for Ondo High Court and they are Akinbinu Sylvester Femi, Leonard Boyede Ologun, Bolatito Florence Ajibade and Akinwumi Bankole Jacob.

The Customary Court of Appeal in Ekiti has three nominees and they are Lawrence Babatope Ojo, Adegboye Rotimi Adesoji and Ogundele Olufolakemi Olufunke.

The five nominated for Sokoto High Court bench are Bashar Ibrahim, Fatima Ahmadu Suka,  Abubakar Adamu,  Kabiru Muhammad
and Amina Modi Yabo while the Sharia Court of Appeal in the state has two nominees as Kadi and are Idris Adamu and Mustapha Abdullahi Ahmad.

Osun State High Court has four nominees comprising Lasisi Muhammmed Adebayo, Awe Micheal Oludare, Fatimah Adejoke Sodamade and Owolawi Joseph Olukunle while has one and is Adamu Mohammed Jajere as well as one Kadi for its Sharia Court of Appeal in person of Kasim Mohammed Kasim.

In the same vein, Kaduna Customary Court of Appeal is to have three Judges and they are Dorothy Sim Inwulale, Atung Dorcas Tabitta and Yusuf Yakubu.

The breakdown also showed that Plateau State Customary Court of Appeal has only one Judge nominee in person of Jettei T. Pekun.

The NJC statement indicated that all recommended candidates would be sworn- in upon approval of their recommendations by their respective state governors and State Houses of Assembly.