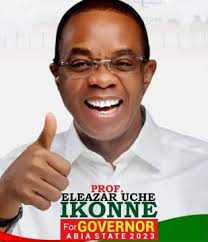 A political situation may have arisen in Abia State following the untimely and painful death of the Peoples Democratic Party (PDP) governorship candidate in Abia State, Uchenna Ikonne.

The professor and former vice chancellor of the Abia State University Uturu, died at the National Hospital in the early hours of Wednesday, his first son, Chikezie, said in a statement.

He said: “I regret to announce the death of my dear father, Prof Eleazar Uchenna Ikonne, who died at the National Hospital Abuja today, 25th January 2023 by 4am after a brief illness.

“He was recovering after taking proper treatment in the United Kingdom but relapsed a few days ago leading to multiple cardiac arrests for which he didn’t recover from.

“Further details and arrangements would be made known to the public after deliberations and meetings are made within the family.”

Political pundits on Wednesday began to postulate on the dilemma facing the Peoples Democratic Party (PDP) and Governor Okezie Ikpeazu in Abia State and how to achieve the governor’s dream of foisting his successor.

According to Section 33 of the Electoral Act, “A political party shall not be allowed to change or substitute its candidate whose name has been submitted under section 29 of this Act, except in the case of death or withdrawal by the candidate:

“Provided that in the case of such withdrawal or death of a candidate, the political party affected shall, within 14 days of the occurrence of the event, hold a fresh primary election to produce and submit a fresh candidate to the Commission for the election concerned.

Amid the mourning over the death of the professor of optometry, Everyday.ng gathered that while many politicians are weeping, “they are not oblivious of political machinations going on around them.”

“They are all very alert to the issue of a successor, no matter how much they shed tears,” an observer said.